A Lesson in Respect 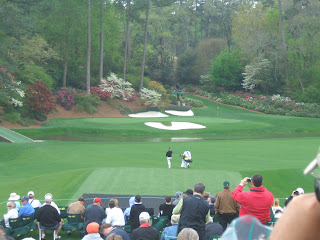 Leg two of my April jaunt was for a practice round at the Masters, in Augusta Georgia. It is legendary hallowed ground to any golfer, or any golf fan. The Tournament, which was started in the early 1930’s was spearheaded by Augusta native Bobby Jones. When watching old clips, or reading of Mr. Jones, I was always struck by his respect for the game, his sportsmanship and his love of golf.

Walking into Augusta you receive a map, and on that map is a note from Mr. Jones. The message is clear: The game of golf is bigger than all of us, and we must respect it. When you walk in as a patron you respect the grounds and the players. You cheer good shots, but never cheer bad, regardless of where your allegiances lie. As a player, you call penalties on yourself and never, ever think of breaking the rules of this great game.

This is a lesson that is seemingly followed by every golfer, or fan, without fail. It is barely even news when a golfer disqualifies himself from a tournament for an obsure mistake; although that mistake may cost him hundreds of thousands of dollars. The game of golf, and its leaders demand and deserve respect.

Is Mr. Jones’ policy followed at Augusta? Absolutely it is. The grounds are pristine. Garbage is carried by patrons, to be deposited in the nearest container. Cigar butts are butted out, and then carried to the same receptacle. I saw zero – zip, nada, garbage anywhere. The crowds were extremely quiet, and although it was only a practice round they were huge. There were a whole lot of “excuse mes, and thank yous and you firsts” at this place. Everywhere I saw respect.

What does this have to do with harness racing? To me - everything.

Some owners and some participants in this game show it no respect. We all know the people who jump from questionable trainer to questionable trainer and know exactly what they are doing while doing so. In backstretch parlance it’s called “following the gas”. It is so bad that our game had to actually pass an owner responsibility rule in California and Ontario to combat these owners and trainers. No respect. No respect for the game, their fellow sportsman, or the horse.

We do not seem to have a Bobby Jones in our business. We are clearly not the game of golf. Hopefully we’ll get there someday, where respect for this business trumps all. We’ll all be better for it.

at April 09, 2008
Email ThisBlogThis!Share to TwitterShare to FacebookShare to Pinterest

My friend from Newfoundland and I have discussed this. No real gambler would hang out with pink and fuchsia azaleas and white dogwoods.We agree you have lost it and have become a dickhead.My Newfie friend thinks you will be gambling a Husky in Siberia on your world tour next.

Next time I am going to Marquis Downs. Know anyone who has been there? :)

Actually, Jones was a native of Atlanta where he was born, grew up, attended college and practiced law.