Time To Catch Up 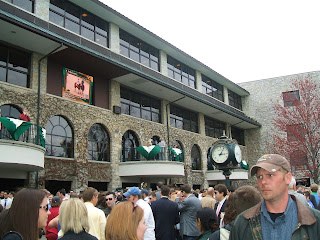 It seems like there is quite of bit of stuff that is going on out there that I have missed. I’m going to have to catch up soon enough. Oh, I guess I better catch up on work first!

The trip was a fun one. I don’t normally take vacations; unless they involve horse racing. This time I had to get some in. The Keeneland leg which I spoke about below was fun. Lexington is an awesome city. I popped by the Red Mile to have a look. It would be a wonderful venue for our World Harness Championships. Kentucky gets fired up about racing, and the city/state governments support many events. The World Equestrian Games are being advertised and so is the Ryder Cup. They know how to, and seem to embrace events.

As for Keeneland, they know how to run an event, too. Post time was 1:10PM the day I went, and I figured leaving by 12:30 would be fine. That was wrong. The line up of cars was about a mile long to get in. I should have known this was going to be busy. I stopped at a drug store on the way there, and saw about 15 University of Kentucky students buying some booze, dressed to the nines. I assumed it was a wedding, or frat event or something. I was wrong, “we’re going to Keeneland” they told me.

Arriving there I saw many of these students and other young people. The number of them was huge. The girls were all dressed up, walking across fields in high heels, going to the track. Kinda like I was in a Twilight Zone episode.

Walking in is an experience. It was built many years ago, and it shows; yet it has a new feel. The shot above is right inside the gates and it is the walking ring. There is a big screen above it to see the odds and watch the races. The gift shop, beer stand and betting wickets are all surrounding the ring. The gift shop is especially nice. You get a slice of racing, and a slice of life in Kentucky at the same spot.

The ticket sellers were quite nice, the staff friendly. Kentucky is a beautiful place, that is for certain. And the racing was second to none.

After the Masters, the way home led through Mountaineer Racetrack and Casino, in Chester, West Virginia. I was struck here, reading Dave Bryans interview in this months Trot Magazine. In the article he said that government sticks their fingers in running casinos here, in some weird ways. Kind of like the one beer an hour thing, or whatever it is here. At Mountaineer you are treated very, very well. There is a shuttle bus from the casino, across the road to the track which leaves every 10 minutes or so. They have brought the poker room to the track itself. It appears they are doing some heavy renovation at the old time track, and they are doing a good job. It was a good time at Mountaineer.

Anyway, back into the fold here, and hopefully we can chat some racing. Things are heating up, and the season is just getting ready to begin.
at April 10, 2008
Email ThisBlogThis!Share to TwitterShare to FacebookShare to Pinterest