Jones-Hopkins. Not a Whole Lot Different 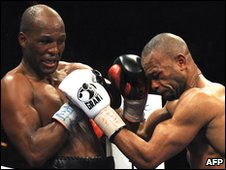 I got a call from one of my stable partners on Friday evening.

"Want to go out to a bar tomorrow night and watch the Jones-Hopkins fight?" he asked.

"Sure, we can catch the Duke game too", I said.

After a couple of emails, we had assembled two other long-time fight fans. If I go through my life of watching boxing, Leonard-Hearns (at Greenwood Raceway of all places), Foreman-Moorer, Holyfield-Foreman and on and on, these guys were the posse. We agreed to meet on the lakeshore near one of the foursome, at a bar which is pretty good for showing sports - which in Toronto is a bar where when a Leaf game is on, they will actually show something else on at least one television.

When we arrived, Nick asked the bartender for a pitcher of Keith's and the golden question:

"Are you showing the fight tonight?"

"The fight? Is UFC on tonight?" the barman replied.

Giving us a look like we were from the planet Zoltar, he told us, "No we won't show that. We show UFC, no boxing."

UFC is the Ultimate Fighting Championship, where people with a lot of tattoo's beat each other silly, and it tends to be popular. Not exactly a sweet science, and about as appealing to me as getting a root canal while being nosed out of a $40k superfecta.

Not sure what to do we ordered another pitcher, watched a bit of the Duke game and decided to buy the bout on pay per view at one of the fella's places nearby. We thought if this bar does not have it, there is no use driving half way around the city looking for one.

When we turned on the feed we immediately wondered who kidnapped Jim Lampley. The coverage seemed amateurish, and so far away from Howard Cosell saying "and down goes Frazier!" as you can get. It seemed cheap, like we might be the only clowns on the continent watching.

Someone in the room finally said, "What the hell happened to boxing?"

Boxing was once a sport, one of the more unique and followed spectacles in the sports world. If there was a big fight, chances are there would be a bar to watch it at, or a radio to listen to. The stars of broadcasting would be presenting it, as only they could. It would be the thing to do. For an interesting (albeit novelty-like) fight like this, guns would be a-blazing for this match. Now no more. That's all gone.

There are numerous reasons for its demise, some of which we've looked at here before. But one thing struck me through the evening: The fans of it are as passionate as fans of racing. When a sport you enjoy, feel a part of, or have followed almost forever is discarded like an old shoe, it is not a pleasant. Fans almost take it personally. "Why are they doing this to me?"

Politics, no one minding the store, throwing your hands up in the air and saying the words "we can't" have plagued that great sport for some time, just like it has plagued racing. There are no easy fixes, if there were they would be done already. But I hope people in both sports realize that whatever they may be doing affects people. It really does, as corny as it sounds. In my opinion, fans of great sports like boxing and racing deserve better.

When I woke up to look at the racing news I found a link to Keeneland CEO Nick Nicholson speaking of his racetrack, racing overall, and the passion he has for it.

"It's about the pageantry and excitement of the sport, the intellectual challenge of handicapping, the thrill of betting on a winner and the pleasure of an afternoon with friends in a beautiful place that looks as if it has always been there." he says.

Well said. The problem is, fewer and fewer people realize it.

Go to a sports bar this May and ask if they are showing the Preakness. Let me know what they say.
at April 04, 2010
Email ThisBlogThis!Share to TwitterShare to FacebookShare to Pinterest

I was trying to find a bar in VT to watch a prep race last year...got the usual blank stare. Though not a huge boxing fan, I feel your pain. I remember the night Sugar Ray beat Hagler..I was living in VA..I drove all the way to DC to celebrate...the down was a graveyard. I enjoyed your perspective!

UFC is the most mindless and boring non-spectacle that I have ever wasted five minutes of my life watching. The irony that something so violent is so dull. Who wants to watch one man literally sit on top of another man for what seems like hours on end?
Yes, boxing and, sadly, racing have been ruined from within. Evolution does not happen quickly but the public has been conditioned to be dumber and dumber; to shy away from intellectually challenging sports like horse racing and from the finesse of boxing.
I can only enjoy the small convenience of not having to wait on a line at any track.

By the way, did you see the amazing race between Lucky Jim and Enough Talk on Friday? Sixty years ago (well before I was born), that would have been front page news.

Fragmentation. It's a problem when you have four different champions per weight division.

Jones-Hopkins?
Isn't that a University in Maryland?

No. But seriously folks....
I was once a Tuesday Night at the Fights fan on USA network. But that was a decade ago. I gave it up for a variety of reasons not the least of which was the lack of exposure on cable television.

I read that Nick Nicholson piece. He's pretty much on the mark when he says that slots are a temporary fix but the horsemen want to up the purses anyway they can get it.

But still the bigger issue is the aging fan base, the newer fans who persevere will take at least a half-decade before they become proficient at wagering and perhaps become lifetime customers of the sport.

Why they aren't lowering the bar to make the new fans more proficient in handicapping and wagering?

If all racetracks lowered the takeout rates en masse' and invested in long term growth parimutuel wagering may still be around by the time Roy Jones jr. makes a Geritol commercial.

Creating more winning customers is one thing that racetrack CEO's simply refuse to address. That must change soon.

I love boxing but find it impossible to follow. I didn't even know the Hopkins-Jones fight was on until I saw it on Sportscenter this morning. A great sport that is totally in the toilet.

Maybe the people at the Red Mile should visit with the CEO of Keenland. The Red Mile during the Grand Circuit meet is all about showing the horses off for the breeders but they act like it is a closed club. Maybe some of Keenland's philosophy can be brought over to The Red Mile so gamblers will feel welcome.

Maybe then the newspapers will cover the Red Mile meet.