Apparently there is a little race called the Derby going on down south. But we have some harness action to take care of :)

> Auckland Reactor, the favorite horse of PTP frequent commenter "Fisherman From Frobisher" makes his North American debut tomorrow. He is qualifying at the Meadowlands, with Brian Sears in the bike. I am really interested to see how the colt does. I hope he does well, as it would completely energize the always cool older division.

> Tioga's meet starts Saturday, on Derby Day. There are free handicapping picks up at Paceadvantage.com, in a contest sponsored by HANA. One of the pickers is Ray, who was recently in Trot, in an article on different ways to handicap, as penned by Keith over at Triple Dead Heat. As most know, Tioga reduced their takeout rates this meet to State minimums. I am planning to play it daily. I see harness blogger Allan over at View From the Racetrack Grandstand is as well.

> By the way - marketing and promotion? How about this? Good for Tioga. Toot your own horn, as you deserve it. Every other business uses price to promote their store or business. Racing usually wants to promote balloon giveaways. 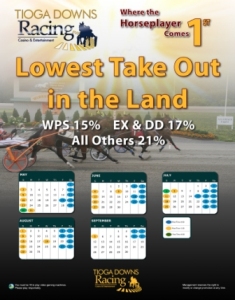 > Rumours are flying on who the new Standardbred Canada CEO is going to be. I have heard some names, but just like backstretch rumour, I will take them with a grain of salt. I did hear from two people Chris Roberts from Georgian might have thrown his hat in the ring. He is young, wants racing to grow and wants to try some new things. Banish him! He has no place in our sport :)

> WEG's pick 4 topped $50k last week. Good for them. The pick 4 has become quite the harness branded bet. Harness players are married to it, probably because of the Meadowlands. They promote their low pick 4 win take in virtually every press release, and have for years.

> North America Cup horses are starting to qualify. We will be starting our Cup Top Ten here very soon.

I'll be back to chat about the Derby later, just in case anyone wants to handicap the big race.
at April 28, 2010
Email ThisBlogThis!Share to TwitterShare to FacebookShare to Pinterest

Before AR is news the horse has to actually beat someone.I hear after he paces in 1.45 tomorrow the plan is to switch to the trot and head to Sweden and win the Elitlopp .