Sportswriter qualified again this morning and went in 151.4, off an even half. They seemed to be looking to find the bottom of him to see how he is, and it seems they found it. His last quarter was 28.1. Time will tell how it goes for him this season, as many colts who seem to lose a wow factor early like he has, still have good years. Just last year Well Said was in and out, but still had some really nice 'ins'. If we remember, he qualified like a 148 pacer and looked right on-track, but then had two sub-par starts at Chester and in the Burlington. He had four or five nice miles the rest of the way, that showed his natural ability.

I watched the first at Churchill today while taking a lunch break. 12 year old Kid Rigo was making his 100th start - not too common in thoroughbred racing. In standardbred, this is very common. You will see a lot of horses with more than that at age 7 or 8. Harness racing is great if you are an owner who wants to watch your horse race regularly. It is one of the unique benefits of owning in the game.

Mohawk opens tonight and the card is a bit of a yawner according to some. WEG has been good in using TVG to sell betting on their races (like the Monday Pick 4), and doing some other small things to help the bet. I feel they have had an old-time monopoly view of opening days, with an "if you put the races on people will come" mentality. I don't think that works in today's society any longer. I think, for example, they should open on a weekend and put some cash behind it. As well, I feel that the card should be a good one, to get people to watch. I was reading on a chat board the other day and a poster started a topic about the opening night and how he was stoked for it. When the program came out, his excitement waned, and he posted this: "I just took a quick glance at the race-conditions for the opener on Thurs....Wow, what a sad bunch....mostly nw's of 1's and 2's, and a couple of cheap claimers...Pass..." That's not what we need for an opening day, in my opinion.

When governments and racing meet you see some crazy headlines; in New York more than others. Now some are complaining, asking why horse racing would get money instead of state parks. That's a new one. When hands are out for taxpayer cash, usually women, children or health care are the conduit to slam another side, not chipmunks, wood and greenery.

VFTRG has his thoughts up on some races this weekend here. I think Auckland Reactor will show his stuff on Saturday, but I have been wrong, oh about four and a half million times before. I wish I kept all my losing tickets over the years because I would like to send them to Adam and Jamie at Mythbusters to see if they could fill the Superdome with them. He did qualify well - better than any downunder horse has before who skipped across the pond to take on North American FFAers, that I can remember. There is a question mark, perhaps, in that they added lasix and are speaking a bit about allergies, which can be killer in Jersey.

I asked my pal Ray, who has built his own software, for some races this year that I can place on the blog. He said sure and sent me the Molson Pace elims this weekend. I, like many of you, feel that the nuances in harness racing makes using numbers only a tough sell - trainer changes, horses on the improve, horses off a layoff and much more. However, no matter what the racing, the fastest horse historically wins the race more often than not, and numbers can tell us something; sometimes things we can not see. Ray was featured in last month's Trot magazine with a couple of other people who are not using past performance lines to handicap. If you bet his overlays over the last two years he has a flat bet profit. That's saying something. I thank Ray for these and we'll have a few more races this summer, to see 'how the other half bets'.

Here are the Molson Pace Elims and selections that go off tomorrow night, with fair odds, according to Ray's Robot (click to enlarge). A free program for the card is/will be available here. 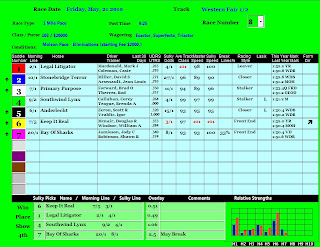 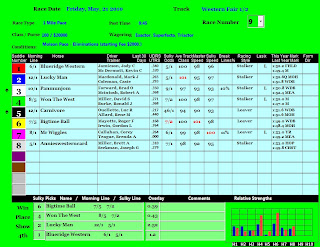 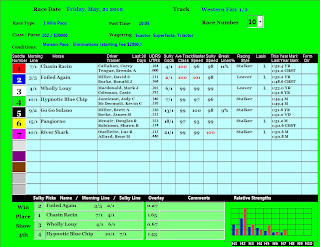 at May 20, 2010
Email ThisBlogThis!Share to TwitterShare to FacebookShare to Pinterest

And the "Minister of Speed" threw down the gauntlet and said "React to this" 147.3 mile! Tough go first time in the country. Georgie rocks.