Preakness: Do You Have $850k in Your Betting Account?

In the 1970's or 1980's some bettors would stand by the $50 window, looking for some tips. Nowadays, things are much more transparent.

Yesterday, about noon, Preakness betting was alive and well with windows open at the UK's Betfair.com. There was action on the usual horses, and the odds were relatively settled. That is, until someone who really, really, really did not like Northern Giant logged in. The colt's odds plunged like a skydiver with one button. This man or women placed US$8500 to book on Northern Giant - at 100-1. If Northern Giant wins, this person is on the hook for about $850,000; and to book that, you need at least $850k in your account. Northern Giant was 25-1 on the tote board.

By 6PM, some of this was nibbled at, but most punters were not buying what he was selling:

Of course Northern Giant ran poorly; in fact he came last, so this punter knew quite well what he/she was doing. However, after the race we had something else happen, that made me chuckle. On Twinspires.com, the Preakness Results were displayed as follows, before being corrected: 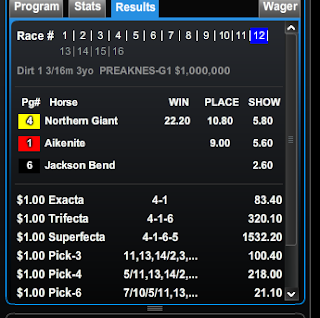 Could you imagine if this punter was not around his/her television and did not see the result, but logged in via his blackberry to his Twinspires account to see if he is $800k poorer?

Someone call the paramedics.

In other news/opinion, I see Todd Pletcher did not much like the two week break between racing for his charge - Super Saver. Maybe there is something to his statistics with that move that we spoke about Friday. That's something to file away when handicapping Mr. Pletcher, especially in stakes races.

Super Saver looked pretty poor in the PP I thought, so I mixed and matched some tickets with him out, but had trouble taking too much of a stand against him. The race, even with what I thought was a negative post parade presence, was not something I could get excited about.

For those of you who took a huge stand on First Dude; congrats on some excellent handicapping. He was fabulous and deserved to win.

Yesterday's harness preps are done for One More Laugh and Rockin Image. The former was a little soft at the end, and that is somewhat troubling for me, but he is a weird horse at times, so we'll see. He converted at Pocono in 51. Rockin Image was quite good and should be on the radar. He had a no chance trip in those fractions and still almost won. Ideal Matters, off three weeks, took a jog around the track, but fired home like he should and is right on track for Mohawk's $1.5M Cup, in my opinion. Rock n' Roll Heaven also looked good yesterday, so maybe (being a grinding type) he needed to shake the rust off, just like last year. He should be back on the radar.
at May 16, 2010
Email ThisBlogThis!Share to TwitterShare to FacebookShare to Pinterest