It's Time For Woodbine to Lower Pick 4 Takeout

Over the past year there has been a slow but sure movement to lowered serial takeouts. The list of tracks, for example, who have moved the pick 4 takeout to lower levels has grown leaps and bounds. Tampa Bay Downs, Northfield Park, Balmoral Park, Western Fair and just this week Fort Erie Racetrack have all dropped takeout precipitously on this bet (to name just a few). Right now in harness racing, the industry standard for pick 4 take is 15%, down from 25%, or more.

Several years ago the Meadowlands and Monmouth branded the 15% take on this bet and it has proven to be a staple. Despite falling handles everywhere, the volume on the bet has stayed strong. In harness, the Big M is the stalwart, with pools exceeding $100,000 frequently.

Woodbine went the opposite direction. In the early part of the decade they raised the take on the bet to approximately 25%. At the same time they went to the 20 cent minimum for the wager. Because the pick 4 bet has been branded as value, Woodbine has pushed the bet and ridden on the back of that branding. However, a beggar thy neighbor policy seems to have endured. Sure folks are betting the pick 4, but they are getting back less in return, and they are not spending money elsewhere. Overall handle is down this decade.

Lower takeout bets, although some like to use it as a crutch, are not successful overnight. Just as $6 a gallon gasoline does not make people change their behavior overnight by buying a compact car, or just like when a credit card company charges 1% less interest a year we do not see major, quick change, the same is true of takeout.

Using Balmoral Park as an example, this becomes crystal clear. In January 2010 Balmoral lowered their pick 4 takeout to 15% from 25%. Along with that they used the bets branding and pushed the bet the best they could, with handicapping tips and on-track telecast promotion. Let's see what has happened since that time. 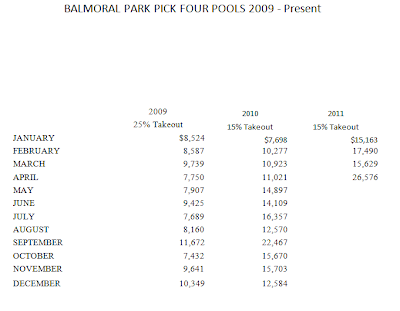 As we can see, the early 2009 pools (on average) have over doubled to today. Last month's average pool of $26,576 is well over 300% higher than the $7700 in 2009. In addition to those numbers, players have responded by having a look at Balmoral's other wagers and races. Handle at Balmoral, with low purses and no slots, rivals Woodbine harness handles at times. Just last Sunday, they did over $1.2 million. Balmoral Park has made more money for purses (in part) by lowering their price on this bet. What recession?

As more and more bettors become cognizant of takeout, what we see happening is the opposite of what happened in the past in racing. From 1908 until several years ago price leadership focused on raising prices. When track "A" raised a rake, track "B" was sure to follow. They could do it with impunity because there was nowhere else to gamble. Nowadays the price leadership is towards a lower take on some bets. If you are a track who does not follow others to the expected takeout rate, you are leaving some branding and goodwill on the table.

If Woodbine wants to be a player in North America a good first step is to follow all the other tracks who have lowered their pick 4 takeout to 15%. It's something that is now expected by horseplayers.
at June 07, 2011
Email ThisBlogThis!Share to TwitterShare to FacebookShare to Pinterest

As an aside, then there is a track like Pocono Downs who is complaining their Pick 4 handle hasn't picked up when they dropped their takeout from 35% to 25%. Duh, you are still 10% above the industry norm; why would people navigate towards your Pick 4 when you are still expensive?

Their VP of Racing believes if the gambler sees something they like they will still bet it regardless of the takeout. One problem. While that may work on track, if people aren't even looking at your signal because of the takeout, there is no chance they will be liking something to bet.