Claire Novak, in her ESPN column yesterday, asked us to look at the current crop of three year olds through a glass half full lens.
That's all probably true, but being a sports fan means we want to see, revere and follow excellence.

I watch the Olympics every four years and I long for the 100 metre final. It is usually a mad dash with two or more contenders sprinting for a world record. I am sure I would watch it if the assembled athletes were unable to run 10 flat, but I really want to watch it when a Ben Johnson is against a Carl Lewis, going for 9.79. If it's a "bad crop" of sprinters, we notice.

If you are watching an NBA Final with Larry Bird against Magic Johnson, it means something.

The current crop of three year olds are putting on a show, but the show is not very exciting, simply because we are watching horses run 100 metres in 10 flat. Speed matters, because horses don't just race each other, they race a clock. It's not glass half empty, it's the sport itself.

I watched every one of Zenyatta's races, and she was popular not only because she had all those people in pink hats liking her (as many would want you to believe). She was all 'that' because in her races she was winning with so much left from off the pace that we knew we were looking at something special. We knew we were looking at the type of racemare who could come within a foot of winning two Breeders Cup Classics on two different surfaces, in back to back years, against male horses. It was her ability to do something that few other mares can do which made her a must-watch.

The Triple Crown series is what it is. It's protected by age, and (mostly) sex. There are 'x' number of horses born three years ago, and those horses will make up the series. We all watch, we all bet, we are all a part of it. But when out of those thousands of horses comes a crop which can barely break a 100 Beyer when put together in a race, many of us will simply look at it with a yawn. It's not dissing, it's reality.

I have been razor-sharp so far this year. After cashing huge on my Derby pick (Dialed In) and parlaying that into untold millions on my Sway Away Preakness bet, I am back with another winner. I will be betting Master of Hounds. I own a hound dog, and I got this picture below a month ago as a harbinger, although with my track record this season, maybe I should heed its advice. 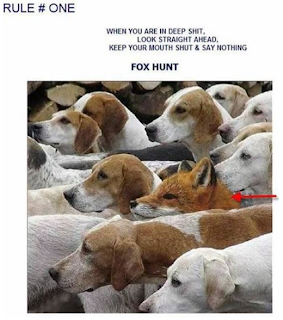 The North America Cup elims are this weekend and we'll have more on the three races later on in the week. Saturday is a great day of racing!
at June 09, 2011
Email ThisBlogThis!Share to TwitterShare to FacebookShare to Pinterest

Who wants to watch a race where one particular horse goes gate to wire constantly? Yawn. I want to see a horse that can overcome obstacles during a race and win; such as traffic, less than stellar surface conditions, crappy posts, poor starting gate breaks, etc. I'm not sure if a horse having speed is as important as if a horse has "heart".

I too watched every one of Zenyatta's races and seeing her maneuver her way through the field, and then breaking into a fourth gear down the stretch, (when most of her competition was losing "puff"), was a complete adrenalin rush for me.

She captured a nation not only because of her ability to gain a colossal amount of ground on the track, but her post parade "dancing" made her appear to have human-like qualities; Like she was there to entertain us; Showing us that the communication barrier between humans and horses is minimal, and when all is said and done, it is up to us if we choose to listen.