We've all heard the line "the cheaters are always ahead of the authorities" and I think there is some merit to that statement. This goes for racing, with synthetic drugs for personal use or for doping in any other sport. There has been plenty of documentation in the matter. If one molecule is changed, the drug can be used with impunity, because they are testing for the old drug. It is a cat and mouse game, with millions of dollars at risk.

The authorities in some sports have changed their methods of late. Rather than look for a drug, they are looking at profile's of athletes. This is to not catch them with positive tests, but to change behavior..

At the Science of Sport Blog, the results since the introduction of a "blood passport" for cyclists, are eye-opening. The profile and the system around it, look for markers that suggest doping of some sort. The profile is compared to a normal one, statistics are applied and red flags show up, or don't show up. After a process, the athlete is determined to have doped, or not doped.


The results of the passport introduction have not "caught" dopers, but it has changed behavior:
Makes sense doesn't it? Look at this following graph: 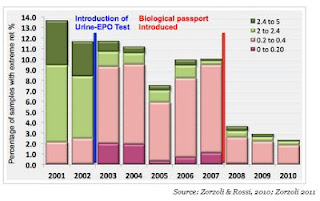 In 2003 the EPO test was developed and EPO presence (the green portion of the graphs) fell appreciably, which is good. However, the pink portion (presumably riders moving on to another drug which does the same thing) skied and there was no change of behavior. The cheaters, according to this graph, still cheated.

Now, look what happened when the introduction of the blood passport happened in 2007. The results are astounding: Everything fell. The sport is appreciably cleaner because if it.

I'm not smart enough to wonder if this will work for horse racing. My last chem course was in my last year of high school. But can you imagine if it could? Not only could it weed out dirty trainers, it would get them to stop doing what they're doing, and we'd save millions on testing. And more importantly, it would help stop our equine athletes (in some barns) from being used as amateur science experiments.

Hat tip to my pal Scott Ferguson at Sport is Made for Betting for the initial link.

Notes: Speaking of science, how about this? A DNA test has been developed to identify horses who should excel at trotting or pacing. It seems all good horses have a specific marker for gait. Fascinating. Iwish I could get this before the yearling sales this year? Who's with me? :)

at August 30, 2012
Email ThisBlogThis!Share to TwitterShare to FacebookShare to Pinterest