So I have this dog. 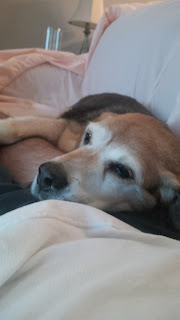 We're not sure what his life was like before; only after we got him from the pound. The vet X-rayed the old boy and said his wounds are from long ago, probably from getting hit by a car and never taken to the vet to properly heal. He was happy for quite awhile after we got him healed up. He was on several meds and they were working well, and we made sure he didn't do too much. Lately, though, like will happen to all of us, he is slowing down quite a bit. A month or so ago he had a bad seizure which I was sure was a heart attack; figuring that was the end for him. Nope. A trip to the vet and some more meds, and there he is bouncing back. Touch wood, no more seizures.

He keeps me up at night and because you have to watch him to ensure he's doing well, I can't leave the house as much as I want to. His vet bills are through the roof and his meds are about as expensive as a human would have in the same situation.  It's not easy.

Conversely, each day he makes me smile at least three times. I mean, he's laugh out loud funny. He sits with me when I work, when I'm feeling down, or happy, when I hit a superfecta, or get nosed out in one. He's given me tremendous joy that money can not buy. He's my pet and a part of my family. I'd do just about anything for the old fella and I treasure each moment we have left.

So I have this horse.

I bought him at a sale and no one wanted him. He made me smile countless times. He won a huge stake where I was surrounded by friends and family after a wonderful road trip I will remember fondly forever. My kids fed him carrots on barn visits and fell in love with him. He was a really good horse who asked for nothing in return but a bed of straw and a couple of square meals a day. Each day he'd wake up and ask "what are we going to work on today?" He felt like a part of the family and the memories we had together were fond and never to be forgotten.

One day, as it happens, my horse got slow; the racing  and training finally caught up to him. He had a sore hock, a couple of curbs, his tendon was a little shaky and ready to let go. The $500,000 or so he made me at the racing wars was all gone; I spent it on more horses, a boat for the cottage, maybe some trips and stuffed some away for the kids' college fund. I could easily get a few more bucks out of him, because I thought I could get him claimed if I dropped him in for 5; but was that the right thing to do? People tell me it is, and they make fun of me if I am not hard nosed in this business, so they must be right. Plus, who couldn't use another five large once in awhile? I popped him in the box and sure enough he was claimed. I took the $5,000 and bought - what I don't really remember - but something.

I found out a few weeks ago my old horse broke down on the track and had to be put to sleep. He was racing somewhere, at some track I never heard of, for people I have never heard of either. That's too bad, but that's the way it is. You know what they say: 'They're not pets.'

The first part of the above story is true. The second part is made up, but it is true for many horses.

It's funny because the first part of the story is common sense. If this blog had more than a couple of hundred hits here and there, I am sure the comments box would be flooded with similar: "I got an old girl from the pound and she lit up my life", "I rehabilitated mine and I would not give her up for the World" or "I found that old dog on the side of the road and despite some bumps in the road and spending money I don't have, the best move I ever made was letting him in my life".

The second part of the story should be the opposite of common sense.  But in a lot of cases it isn't.

"They're not pets". Those three words seem to give everyone an out. If you think they're pets you are weak, or stupid. They're commodities. With commodities you get rid of them when they are no longer one. What happens to them, happens to them. We wash our hands of it, just like the people before us, or after us. It is what it is.

I don't think it should happen that way, and neither do a lot of you. The solution is not easy, or readily apparent, and probably never will be.

The only thing I know for sure is it's better to be a dog than a horse. A dog is a pet and that's a big difference to a lot of people, even though in many cases there's not very much of a difference at all.

Related:  "The Unlucky Ones" and "Monzante, Former Eddie Read Winner, Breaks Down in $4,000 Claiming Race"


at July 22, 2013
Email ThisBlogThis!Share to TwitterShare to FacebookShare to Pinterest

Whew, PTP, I was getting livid as I read along, I hope people read these, and maybe some will get what I am trying to say, it's not about the age of the horse, it's about respect

Unfortunately PTP, if you have worked for the humane society and have seen some of the things that people do to their 'pets' (dogs and cats and others) or don't do but should, it's not better to be a dog. It happens with all animals and people just need to be better, well, people. Look after what animals you have whether a horse, a dog, a cat or a hamster for that matter. If you can't, don't get one or find somewhere responsible for it to go. Personally, and I know it's not possible for all, but I have kept my retired racehorses and broodmares and some are buried on the farm after passing from old age. My one broodmare is 17. I had her mother (who is buried here) so I delivered her, watched her race, cared for her when she couldn't race anymore due to injury and have delivered her own babies. Even though she is close to retiring from her current career (and a great one it is with three stake winners and a $350,000 winner) she will stay and be buried here also when the time comes. there is no way I could let her go anywhere with anyone. Just like my 'pet' Rottweiler was considered, although now buried underneath the pines beside the fire hydrant, they are all thought of as family in my mind.

The people that treat racehorses as commodities are the ones that fear grief, pain, and sorrow.

This is a fabulous piece and should be a MUST READ for everyone who loves or is in racing, on every level. Make those kids at the University of Arizona's and Louisville's race track industry programs read it! In fact, I just might send it on to those two programs.

I currently own race horses and I have promised each of them, right to their pretty faces, that "I have your back, forever and always." Now, I have partners on those horses, and you can bet I am going to be at their doorsteps demanding money to claim/retire/rehome these beautiful animals who give so much enjoyment and, yes, sometime financial reward. I think I have a good group of partners in my syndicate so I don't think this will be a problem.

But I am going to keep track of my horses right to the end. So in that respect, I have to disagree: my race horses ARE my pets. I have their backs and they can count on me. A promise is a promise, whether you make that pact with a person or an animal.

Some of these commenters do not understand the use of sarcasm.....

This is one great read and it infuriates me even more that these "people" think throwing away these beautiful thoroughbreds with so much heart is okay. Just "business as usual". For the life of me, I will never understand how the "industry" really expects to keep fans and get new fans. Don't they realize people are much more aware now about animal abuse than they were in the past. We are not going to put up with it. There needs to be ways to track these horses and breeders and owners have to have responsibility for the thousands of new foals that are bred each year. Never mind Thacker, where are the owners who made $500,000 off of him? There should be ways to make sure what happened to Monzante doesn't keep happening. As someone else said on twitter, a "chain of responsibility"! Louise Castello@Serial54