The Monzante story (at least on my timeline on social media) seems to have evolved into a bigger picture narrative on horse retirement, and that, for me, is welcomed. It's a huge issue. Caroline Betts, who runs a horse rescue and is a USC economist-sharp-cookie on a lot of things, went into a late night twitter montage. 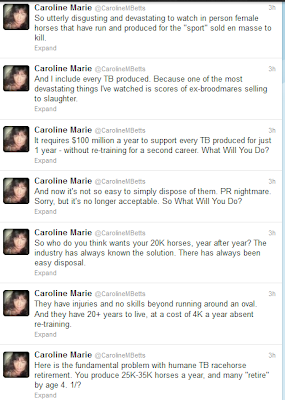 That's a lot of money. Taking care of horses - they're big and they eat a lot among other things - is expensive. Maybe that's unworkable but there's a starting point if you were really serious about doing something.

I wonder if it's money well spent?

Back in the 1960's the National Football League had some issues and the big one was was television. Pete Rozelle, the commissioner, had to convince the owners that television was the way of the future and that the only way the sport could grow was to work out a collective plan to exploit it for the leagues gain. The owners were up in arms. At that time live gate was the major revenue driver for football. The owners, especially in small cities did not want to do this, fearing a loss of gate revenue.

Eventually Rozelle convinced these businessmen that pooling some revenue would benefit everyone; that no team would be left behind. That the league would be stronger, more competitive and would have a foot-hold on the television market that other more scattered leagues would not. It worked. Multi-billion dollar TV deals has made the NFL the most successful sport in the western world.

In the words of Art Modell, the then Cleveland Browns owner: Rozelle got "a bunch of fat cat republicans to become socialists".

That was hyperbole, because they got together to try and monopolize a medium - to step on the necks of other sports leagues - and they did; but the fact they did something together to be cold-hard capitalists is not lost when you look at sports history.

Similarly in other businesses today we see "green friendly" initiatives, "above and beyond workplace and environmental policies", and much more. Are they knitting peace quilts at Greenpeace rallies? Are they purely altruistic? A simple link via Wiki:

"Businesses can use ethical decision making to secure their businesses by making decisions that allow for government agencies to minimize their involvement with the corporation. For instance if a company is and follows the United States Environmental Protection Agency (EPA) guidelines for emissions on dangerous pollutants and even goes an extra step to get involved in the community and address those concerns that the public might have; they would be less likely to have the EPA investigate them for environmental concerns. According to some experts, most rules and regulations are formed due to public outcry, which threatens profit maximization and therefore the well-being of the shareholder....."

In racing we can't really get over that same hump can we? Do capitalists like CDI, for example, need to mix in a little more socialism when it comes to horse retirement?

One would think they need to. If stories like Monzante and frog juice keep propping up in Louisiana, how tenuous does their hold on a slots license become? What about for Boyd Gaming?

If one falls, does alternate gaming get hit in Florida too? What about Pennsylvania or Ohio? What about New York?

Car companies have played the game well. Other businesses do this as a matter of course; not because they plan to move to socialist Albania, but because they want to ensure their businesses make money, right here in capitalist North America.

What's holding racing back? I don't know, but I think they need to get their asses in gear and salute the socialist flag when it comes to horse retirement. It'll probably pay off with cold hard cash in the long run.

at July 24, 2013
Email ThisBlogThis!Share to TwitterShare to FacebookShare to Pinterest