Gold Cup & Saucer, Grassroots Appeal, Even on the Interwebs 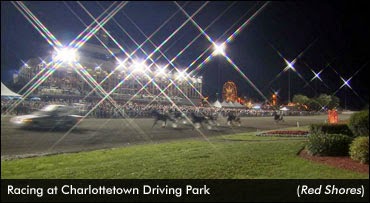 Tonight is the 55th edition of the Sobey's Gold Cup and Saucer in Charlottetown, PEI. The event, which has been branded the old-fashioned way - without money spent on branding - is a stalwart of the grassroots harness racing season in North America. The $75,000 purse Gold Cup is contested at midnight Atlantic time (11 eastern) in front of a raucous, fun crowd.

I was perusing the social media-a-sphere (that's not a word, but I like it) today. There is the Garrity at Saratoga for $250k, there are a half dozen or more stakes at Mohawk, where the Grand Circuit has moved into town and the who's who of the sport are in those places. However, check it out:

"Gold Cup" and "Charlottetown" and "PEI" are all harness racing topics being spoken about, moreso than many other topics in the world of harness racing. That's tantamount to a $75,000 open stake at Remington Park being talked about as much as today's Arlington Million.

As I mentioned on twitter, I was sitting at the beach in Nova Scotia last evening and someone had the classic rock station Ocean 100 on. Lo and behold at a commercial break they played the stretch drive of the 10th race last evening from Cahrlottetown Driving Park. Harness racing, even not the Gold Cup card, is a big deal. Racing, unlike virtually everywhere in North America, does not have to pay the media to cover it, it's covered because it's a story.

For the full story on tonight's Gold Cup, it's here.


at August 16, 2014
Email ThisBlogThis!Share to TwitterShare to FacebookShare to Pinterest