Stakeholders Are Customers, and Racing Better Consult Them

The historical definition of a stakeholder generally leans to those factions who are directly correlated in the corporate umbrella; the company itself, and its shareholders. When we hear of "stakeholders" in horse racing we often hear about the usuals: Racetracks, horse owners, and trainers, through horsemen groups. Those are the legs of the stool.

Through evidence of shocks to a business, industry or corporate entity, stakeholder theory was broadened in the 1980's by R. Edward Freeman.  He believed that there was more to it than advertised. Stakeholders could be governments, customers, employees or others, should they possess a few characteristics; namely, characteristics answering the question, "do they matter?" 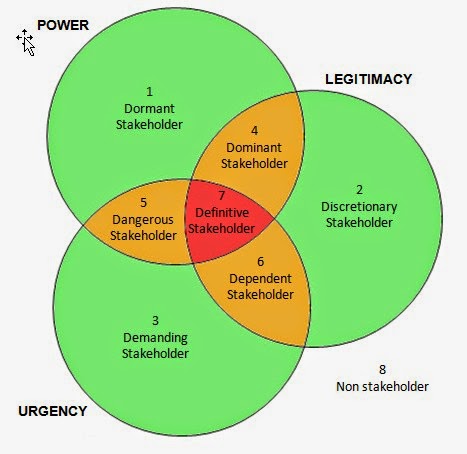 He or she who yells loudest does not make a stakeholder, although those who yell do possess characteristics of a stakeholder. A customer, or groups, begin to be stakeholders who need to be taken seriously when they fit a profile, as detailed by the Venn diagram to the left.

If someone has power of some sort - say by being a customer and spending money - you can be a stakeholder. By definition, you need to be able to take an issue, tell someone else, and get that person to act to be a worry for the corporation to have real power, however.

You also need legitimacy. If your argument is not good, you won't get anywhere.

Lastly, if the issue is urgent - i.e. it is causing the corporation the need to draft a response or policy change - you're into the nitty gritty.

An example of this might be, say, a protest of a shoe maker who uses child labor. A person or group starts a Facebook page, gets likes; that's power. They have a legitimate gripe: They do not want their money going to child labor. And their story is resonating to the point where it's in the news, and the company needs immediate action or their business will suffer. This problem lies in the "Definitive Stakeholder" category of the intersecting circles. Companies spend millions on this circle in Corporate America.

In horse racing, customers were never in that circle. Maybe a couple had power, Lord knows many had legitimate gripes, but there's never been urgency in any way, shape or form. Nowadays, however, things have changed.

We all remember Santa Anita or Churchill Downs takeout hikes. In the past these were met with a whimper, but now, with power (the ability to tell others, withhold wagering as a group etc), legitimacy (the rake is too high, we don't have enough customers, why are you moving it higher so we play less and handle goes down) and urgency (the handle for a track can go down tomorrow if this passes), definitive stakeholders made a difference in the bottom line. You can't live in a vacuum, or you get swept up in it.

Last evening, for a brief example, there was an announcement about a daily double at NYRA, overlapping to Santa Anita. Insiders, "the entity", love these cross track bets, for some reason, and they come and go at times. This bet was immediately panned for its high takeout rate and other reasons on social media.

Later on, there were tweets to the Horseplayers Association feed asking to "boycott" the bet.

This is not 1980. It's not the pre-Freeman era of stakeholder theory. Things happen fast, and the stool has more than three legs.

Racing has not come to grips with this yet. It's old-school, some corporate tracks can focus on ignoring issues, because they get so much of their money from gaming, etc. But as customers become stakeholders - because they possess power, legitimacy and urgency - a new paradigm is needed. The stool needs to have four legs. The tracks that embrace that fourth leg, like for example, Kentucky Downs or Keeneland, will move forward. I believe the tracks that don't, not only will not, but it will probably get worse for them.

at October 09, 2014
Email ThisBlogThis!Share to TwitterShare to FacebookShare to Pinterest