This fall's Keeneland meet had handle drop once again. This meet, favorites won at an almost unprecedented 43%.

I thought I would print this article written for the TDN earlier this year. I think the thesis is sound, and the sport should always look at making things more interesting for the handicapper. When the art of handicapping is deeper, with more angles, with more chaos, it makes the game easier to beat, not harder to beat, and that attracts betting dollars.


No Easy Money, A Gamblers’ Diary, written by UK horseplayer Dave Nevison is a dandy read. For those of us here in the New World it provided us with an interesting, eye-opening glimpse into the day in and day out machinations of a UK horseplayer. The book followed Dave’s quest from the 2008 Cheltenham Festival right through to the last flat race of the year, the St Leger at Doncaster, and detailed his day to day bets, his ups, his downs, and the method to his madness in trying to beat the races.

What struck me most about Dave’s exploits was what he bet and how he bet. In the US, exotic betting is the rage – Rainbow Six anyone –while in the UK, Dave persevered through betting win only, taking advantage of good prices, through either bookmakers, or the betting exchange. He’d often write of his “tissue”, which was simply a list of two or three horses he liked for the day, sniffed out through his intricate research. Dave was not taking stands on a low takeout spread pick 5 at Keeneland for $1,944, hoping to shoot for a $10,000 score, he was betting £3,000 or £4,000 on horses he’d been following. The way UK racing was presented at that time, allowed him to do so, and it allowed him to profit.

Dave and other UK punters saw tremendous value in 14 or 15 or 17 horse fields the BHA was carding. These races could have 8-1 favorites, and twelve of the fifteen entries were competitive. This created a glorious unpredictability that provided value (before even factoring in the lower win takeouts). Why would Dave and others need gimmicks to get them to hit the road and bet? They had the greatest gambling game in the world in front of them, served like a dinner plate of bangers and mash. UK handle (turnover) from early in the 2000’s to the mid aughts, with people like Dave boarding trains from meet to meet betting win only, was doing fairly well.

About six or eight years ago, that all seemed to change. The edge that big fields provided customers in the UK – the gambling game they were used to - began to erode. 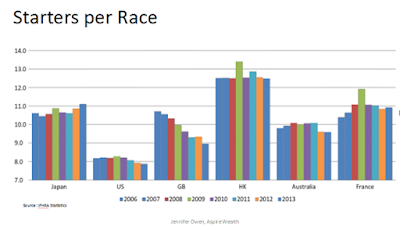 In 2000, field size for races in Great Britain was over 12 per race; in 2005, just over 11. In 2013, that number plunged to below 9 per race. In the UK there was a push for more races, and more races beget fewer bettable ones. That big of a drop in field size for a customer base conditioned to bet big fields was felt mercilessly in the betting pools. Per race handle was crushed; in fact, the losses in betting per race in Great Britain are higher than anywhere else in the world since 2006. Those like the Dave Nevison’s of the world – those used to giving the game a real go betting win in the huge fields – increasingly found something else to do. 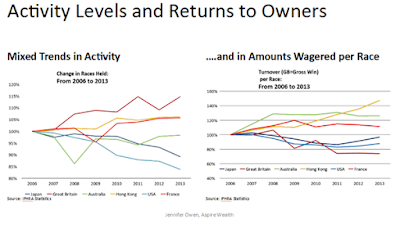 I think this is a tale that is not only steeped in Great Britain industry lore. It’s a tale – sometimes in real time, in others cautionary - that can be told to any jurisdiction that puts on a horse race.

On my betting blog this week an American bettor left the following comment: “The industry proceeds on a false premise. They truly believe the public wants predictable racing. From a betting standpoint, nothing could be farther from the truth. A six horse field is more predictable than a twelve horse field of similar horses. The betting public knows this and bets the twelve horse field much stronger. A four horse field is extremely predictable but very few will bet on it, knowing that the effective takeout escalates as field size decreases. There are different surfaces, there are different distances; which is exactly what the game needs to flourish as a gambling industry.”

I think he is 100% unequivocally right.

It’s not just in the UK that this phenomenon is seen, nor is this only found in horse racing; it, quite frankly, is an immutable law of gambling in any game of the pari-mutuel variety. Less chaos and more predictable races – making the game “easier” as we hear needs to happen so often here in the US – does not grow handle. It erodes value, and destroys handle. Despite scores of industry insiders predicting the opposite, last fall at Keeneland all-source handle declined 12%; yes, even though they made the races easier to handicap. I don't think this should have surprised anyone.

In the US, let’s take a look at some US dirt field sizes in 2014, courtesy of the Horseplayers Association of North America’s sortable stats web page.

Those are some of the biggest and best dirt meets traditional US racing has to offer. Those are horse racing’s TV commercial to every day gamblers. If UK handle per race was hurt as much as it was going from an average of 11 per race to 9 per race, what does a 7.4 average field size do to US racing on traditional dirt with gamblers of all stripes? When you add that the takeout rates are higher here in the US, it exacerbates the loss of value even more.

High takeout, small fields, no chaos, and predictable outcomes equal little or no value. There’s just no way around that.

Because the industry, for various reasons, seems unwilling to provide more value to new potential customers through lower takeout, it appears something should be at least done with field size, and we do hear often that field size increases are something that’s being paid attention to. However, is a marginal increase the industry speaks about anywhere near enough?

Last week’s Wood Memorial card had a late pick 4 guaranteed at $500,000. Considering the quality of fields in the pick 4 and the massive eyeballs on a Derby prep one might expect customers to blow that guarantee away. But that did not happen. Just over $600,000 was bet, and with one minute to post I saw more than one person comment, “will they even meet the guarantee?” The Wood Memorial pick 4 sequence was just too rudimentary to drive handle. The fields were fairly short, the favorites obvious. It was, on paper, too easy. I don’t for a minute think that adding one or two horses per race would fix that pick 4. I don’t think tinkering can get the job done.

I believe (and there is some academic study to back this up) a field size of well over ten per race is optimal. This isn’t a 7.25 to 7.75 fix it field size issue. It’s bigger than that.

In the US we do see some glimmers of hope. Kentucky Downs, run through a “value” algorithm by the Horseplayers Association of North America just this past week, was ranked the highest value track of 62 North American racetracks. Their lower takeout menu, along with field size of 10.18 horses per race is much closer to the pre-2006 UK ideal than any other track in North America. Bettors have been responding, and now pump over $3,000,000 per card through the windows (this is up from below a million a few years ago). Big turf fields at Belmont or Keeneland can still get the job done and we hear rumblings of circuit racing in Maryland. But in my view I don’t think that’s enough to propel handles to where they need to be.

With mandated racedates, slot money, and alphabets pulling the sport in a hundred different directions, getting field size up to value levels to attract many the sport has lost – that is, say, half the races on a card of 11 or 12 or more horses per race - will not be easy. Figuring out how to get to that point if everyone ever does put the oars in the water is certainly well above my pay grade. But academically, and from a fundamental gambling perspective, I think it’s a vital goal for the sport.

at October 25, 2015
Email ThisBlogThis!Share to TwitterShare to FacebookShare to Pinterest