An Historical Look at Racing Protests

Since the 60's - probably the 860's - protests have been frequent and ubiquitous; well in the free world anyway. 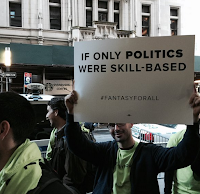 Some are very socially important and some, well, kind of aren't.

This morning's one might fit into the latter category. Yes, hundreds of 25-44 year olds with incomes over $75,000 per year, had a DAILY FANTASY SPORTS PROTEST in New York.

I doubt much will happen with this protest, because they're fighting the man, plus the newspapers, and Drape, and anti-gambling casinos (I think that's one of those oxymorons), and a church that doesn't like gambling unless it is being done at a bingo in their basement, and some rich people.

Regardless, it's nice to see young people today doing their thing.

It got me to thinking about some of the greatest horse racing protests in this sports' long and detailed history. You probably remember some of these, but let's recap.

The ZENYATTA MUST GO ON DIRT Protest - This, in the height of the polytrack era, was a doozy. Zenyatta, the undefeated mare, was racing on synthetic tracks in California, and this did not sit well with some (especially with people who still think Easy Goer was better than Sunday Silence). They wanted her on dirt, and when pointed out that she was, twice on dirt, at Oaklawn, it wasn't the right dirt and it was not against horses with testicles. When she raced well on dirt in the Breeders Cup against testicle horses, protesters could finally enjoy her first 19 races.

The BRING HOME CHROME Protest - This was real, and at times, frightening. Chrome's owners were not only blamed for shipping him to the UK, but for Justin Bieber's resurgence, ISIS and Glen's fate on the Walking Dead.

The BAN PITTSBURGH PHIL Protest - Very early on Phil won too much and people began to protest it.  The New York AG at the time left it alone, and Phil's career was allowed to flourish. "Some people are just better than others at some things", the AG said.

The LOWER TAKEOUT Protests - These have been going on for years. To clamp down on the vociferous masses, the industry alerts the media to incessantly mention the one-week Laurel takeout experiment. There, over the years, has been talk of using rubber bullets to stop the uprising, but instead the executives have punished customers with more jackpot bets.

The INTERNET FREEDOM Protest - This one too has been ongoing. Several in the industry have looked to create cutting edge offerings to increase wagering in the sport. This has been extinguished by data providers asking for cease and desist, and then once that doesn't work, charging $10k a month for use of a newspaper race chart.

The FREE RICHARD DUTROW Protest - This one, sadly, had no legs.

The GET RID OF THE BREEDERS CUP MARATHON Protest - This one did have legs. No, no more can we bet horses going around and around and around. And around. But it might be a good thing, because nowadays most dirt horses in North America get tired after 5 and a half furlongs.

The KEENELAND GO BACK TO POLY Protests - This baby started off slow, because everyone supposedly loves the glorious dirt. When the field size crumbled and handle tanked, it has picked up steam.

The KENTUCKY DOWNS NEEDS MORE DATES Protest - This baby is in full swing each September, but never really results in too much good happening for Kentucky Downs. After all, a few dates hundreds of miles south of Keeneland hurts their field size and we all know how important field size is when it comes to decision making.

The SARATOGA ATTENDANCE Protests -  There are "attendance truthers" out there, and they are not stopping. Each year they protest the reporting of Saratoga attendance numbers, mainly pointing out that "look around, there's lots of people here" is simply not good enough. Many have been shouted down, and these protests now mainly occur on the dark web.

This sport has a long history of protests. They are alive and well and like most other protests, rather futile.

Keep fighting the good fight people. And have a nice weekend.

at November 13, 2015
Email ThisBlogThis!Share to TwitterShare to FacebookShare to Pinterest

A brilliant piece of humour.
But unfortunately, (for the player) very revealing.