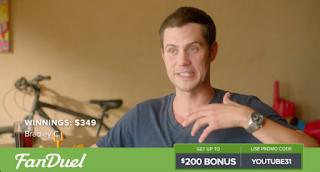 Out of the thousands of players who play and have fun with DFS partake in unregulated gambling that everyone with law degrees seem so upset about, Brad, with "$349" in winning teams was chosen as a poster boy.

Awful Announcing found Brad and asked him a few questions. It turns out Brad is really a regular guy who plays some tournaments with friends for fun, and just happens to have won a couple of dollars.


That’s one of the main reasons my winnings were $349. To be completely honest, last season was my first season in fantasy period. I had a lot of fun and kind of got bit by the fantasy bug. Then I started playing DFS with FanDuel primarily. So probably just a little bit over a year ago. I don’t play $25 buy ins to win a million bucks. Mainly just these fun games between me and my buddies just to make the season more interesting.  Or I’ll play some buddies in a 1 on 1 heads up $1 game, because if I lost it in the week before in a season long game I can play then for getting back at them, or maybe I’ll lose again. It’s that kind of thing as opposed to using it trying to make money. A lot of people on those commercials, yeah you won $2 million bucks, you are gonna be sitting there every week putting in 900 lineups and researching these stats and doing that. I’ve got a real job and a real life outside of playing games on the internet. It’s just a lot more fun for me.


Those commercials were from back in April and that $349 was real, and I can tell you that as of a few days ago the actual number is $650. Like I said, I’m not blowing chunks of wads, I’m still the regular guy.

A newbie with a few buddies play a game. The game is fun and with a little work you can win a few dollars.

We read a lot about today's gambler and most of it is true. You have to work hard, study often and dive into a game to succeed. However, for the masses, they mostly just want to have a little fun and have a chance to make money.

FanDuel, DraftKings and other games like this offer that, and they're not blowing smoke. They don't scrape everything out of a pot. They don't nickel and dime at every turn. They don't make the betting experience painful (although AG's and some states are wanting to do just that). That's a big reason why they've succeeded thus far.

Horse racing, on the other hand, is an older game fighting an old tagline: "You can beat a race but you can't beat the races." "Bradley C" knows that and marketing this same way to people like him is a non-starter.

Changing that stigma, that tagline, will take reform and a major cultural shift for the sport of horse racing. Thus far that has been elusive.

at November 16, 2015
Email ThisBlogThis!Share to TwitterShare to FacebookShare to Pinterest

After seeing a post on PA about Derby Wars , I think that's a better " fun" place for a horseplayer to play rather than fantasy football. I played FF for 2 years in high stakes leagues rather than daily and I was a nervous wreck. I think I may give Derby Wars a chance after I research it more. Some of the ' takeouts" look lower than even what a lot of rebated horse players bet into.