As Baseball Shows, Some Numbers are Just Numbers

There was a look today, from the Fox Sr. VP of sports programming, at the television numbers for the recently concluded World Series:


"As a longtime television partner to Major League Baseball, we at FOX Sports also engage in a decades-long debate about baseball numbers and their meaning, but in our case the numbers are Nielsen television ratings.  Here again, context is key, and differing points of view can paint sharply different pictures of the health of the game, as we see every October when World Series ratings are dissected by industry observers.

The defining trend of media in our lifetime is fragmentation – the process by which the enormous audiences once generated by a small number of entertainment options have splintered over the years and have been redistributed across hundreds of TV networks and many thousands of digital destinations...... media content has become ever more individualized and on-demand."

Yes, people are not watching the World Series in huge share any longer (e.g the 28.7 share for the Big Red Machine series in '75 versus this year's 8.7), but in this television-polluted, fragmented landscape, it's all relative. Relatively, the World Series share is fine.

So is the "health of the game". 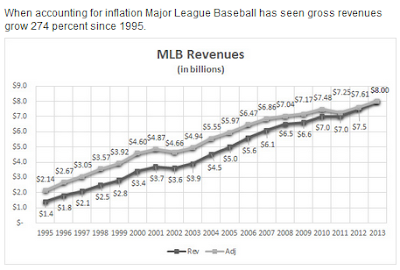 As we in racing read about TV numbers, we have to look at them in context, too. Just like people in 1975 had a choice between a rerun of Laugh In or Cannon (William Conrad rocked, I just thought I'd throw that in) and a World Series game and the game kicked butt, racing had little choice against it in the media when Sea Biscuit raced War Admiral, or when Northern Dancer won a Derby.

That fact that Derby TV ratings are not what they once were, or that meager Breeders' Cup Classic share we read about happened, or that the percentage of people are not watching racing on TV like they once did, is not really worthwhile to be talking about. Like baseball, it's fairly meaningless.

What is meaningful, though, is the fact that unlike baseball that's where the similarity ends.

In horse racing we have our revenue metric to talk about and examine, and that's betting handle. That's the number that drives revenues and is a pretty decent barometer of the health of the game. It's been the most troubling number of course; this sport needs betting handle to increase each year at about the rate of inflation (say 2%) just to hold even, and it ain't happening.

Betting handle has been increasingly been fragmented, due to both the competition and internal strife. And it's those holes, that fragmentation - not TV ratings or social media mentions or twitter trends - that really needs to be filled.

at November 05, 2015
Email ThisBlogThis!Share to TwitterShare to FacebookShare to Pinterest