Over the past few years I personally have enjoyed the Bud commercials most. Call me a softee, but I absolutely love them. Lost puppies, baby horses, little animals? Are you freaking kidding me, I get misty just thinking about these great commercials.

This year though, Bud is changing it up, because well, puppies don't drink beer.


Anheuser-Busch has announced that the 2016 Budweiser commercial will not feature yet another adorable puppy. Why? It’s simple – as beloved as they are, the ads don’t sell beer.

Budweiser is an old, blue collar, after shift, dirt under your fingernails, hard working American beer and it always has been. Marketing is most effective when your product matches the message and your message matches the market; knowing who you are and being who you are is an immutable law. Budweiser isn't puppies.

So they've switched it up, primarily with a message like below:

That probably fits better with who they are.

Although I like puppies and beer, and spent some time doing blue collar work where we ended shift with a Bud, this is a racing blog, so let's analyze a pretty simple parallel.

Racing marketing is generally about pretty people and big days and booze, and parties and Johnny Weir. I like all those things (especially Johnny, he kills me), but with 40,000 races in this country a year, about 39,943 of them have absolutely nothing to do with any of those things.

Have you ever been to Mountaineer on a Tuesday night in February? What about that racing, the one that pays the bills 360 or so days a year?

I think there's a place for some new 'marketing' ideas in the sport; namely, understanding who we as racing fans and bettors are, and adjusting accordingly. Budweiser is figuring it out, racing should, too.

In harness racing update, EPO positive at the Meadowlands, Jeff Gural gives his fair odds line on everything harness racing (takeout reduction supporters, you're SOL), and changes that have been made by a defacto central body in Australia. Can they be ever done here?

"We often hear that harness racing needs to change. It needs to try new things, be innovative, be more customer-centric, spend money on promotion and marketing. It needs to be more than horses running around in a circle; like they were when Dan Patch was a star. When suggestions like the above are forwarded to improve the sport, all we tend to hear in response is, “yes, I want change, but I didn’t mean that change.”

Well, congratulations to a good fella - Paul Matties - for winning the NHC and grabbing a nice $800,000 check. The NHC sure throws hot water on the criticism it's a crap shoot, because the final table had some great handicappers of all forms and from all walks of life. There needs to be so many games in a series, or holes in a golf tournament so that the best team or player is uncovered. This grueling three days appears to find the best horseplayers.

Congrats to @dinkinc for putting a $20 spot on Paul, too. That's a nice cash, but not as good as Paul's, Dink. Paul has been a regular guest on Dink's Vegas radio show several times when they talk horse racing.

Our pal Charlie Davis came third, and I give my personal congrats to him. Charlie didn't know a lot about horse racing ten years ago, immersed himself in it, and found himself cashing a nice check. Charlie has donated hundreds of hours of his free time for horseplayer advocacy, and despite being hammered at times (tracks, horseplayers who want something done yesterday that doesn't get done, the media, regulators etc that wish adovocacy would go away), he has always taken the high road.

What a scene for the Prix d'Amerique. 36,000 people, $40 million in handle and a great day. Bold Eagle is an absolute superstar. 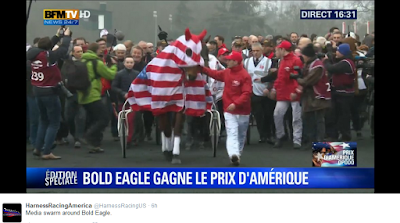 The PMU in France has a monopoly of sorts, so it's hard to compare France to Canada or the US, but they do tend to try pretty hard; which, by definition is the opposite of what monopolies do. It seems the whole town knows the race is going, and there is some buzz. That's difficult to do in horse racing, especially in a heavy urban setting like Paris.

at January 31, 2016
Email ThisBlogThis!Share to TwitterShare to FacebookShare to Pinterest