I read with interest - more like the interest I might have watching a high speed chase on KTLA - the New York Times article on betting, out today. I say betting, because the subject matter in it can refer to any pari-mutuel game. 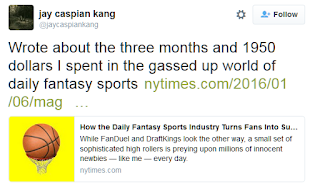 The column, like most churned out by the Times and others, speaks to the inherent losses occurring in a pari-mutuel game; the larger players feasting on smaller ones, the 'inequities' of such games. In general, these articles state : unless you are good, have a nice bankroll or have special skills, you're a sucker, and the companies know it. They usually feature buzzwords like "preying" and "innocent newbies".

"Big players" making money from smaller ones happen in games like racing and DFS, not because of some grand conspiracy, but because that's the way the games are built.

"Large players" are not big by choice, Because they are better than average (or average plus ten points) and have generated a bankroll which grows, they make themselves into large players. They, because of rational economic behavior, bet on a curve until their ROI approaches zero. At that point it's optimal, which is why they are in so many games. This is the marginal cost equals price curve for a single bettor, and this is a staple of any pari-mutuel game.

Asking this rational behavior to stop is like asking the New York Times not to get big and feast on readership of smaller papers, by improving their internet offerings to crush competition, by hiring more staff, better writers, reinvesting profits. The New York Times works on marginal cost equals price, and an act of Congress won't change that.  Neither will rules and regulations of a pari-mutuel game.

Racing and DFS offer customers a market, and that market will be exploited by the best players in the game. The best players in racing - like DFS - work on razor thin margins, where their ROI approaches zero, but at that ROI the money isn't gone out of the system. The New York Times and others say with such voracity this fixes the game against the new player, but that's untrue, it only makes it harder. New players do and have won million dollar tournaments at FanDuel, have and do win "Jackpot super high fives" on a $20 ticket at Woodbine, have a do win games with their friends at DraftKings or Derby Wars, have and do hit a pick 6 against the sharks.

A lot of these players play for fun, for a chance at a winner like that (as we see with Rainbow Sixes), and that makes up their marginal utility. It's also why you see so many casual players so up in arms about DFS being legislated out of existence. Sure most lose to #maxdalury or a big racing player, but they and their -50% ROI are happily fielding a few teams, or watching a workout at Santa Anita, trying to make a score today. Maximizing these people's utilities is not a macro-legislative issue, it's a micro customer retention issue.

To somehow suggest that there's a smooth curve where 50% will win and 50% will lose like most of these publications and articles suggest in this Utopian vision, shows a lack of understanding of the course material. If you want that, try selling a game of coin flip on the internet and see how you do. Nothing will change the fact that while betting "amongst ourselves" the most profitable players will play the most money, and they will win the most money. Without this counterbalance, you won't have a marketable gambling game in the first place.

at January 06, 2016
Email ThisBlogThis!Share to TwitterShare to FacebookShare to Pinterest