Well the Eclipse Awards are over for another year! The show was grand, and at times, shocking, but these are never not fun. For those of you who missed the show because you didn't have TVG, HRTV, Free TV Austria, an internet connection, here's a recap!

First up, the winner of the Best Jockey Who Appeared on Dancing With the Stars Award presented by Adam Hickman ® - went to Victor Espinoza. That wasn't the whole story however, as told by Peter Rotondo to TMZ. "Backstage, Irad Ortiz let Victor know about some critical tweets from Adam and all hell broke loose." The Awards were delayed for ten minutes, which prompted Frank Stronach to say, "just like one of our post drags." Everyone had a belly laugh.

Next up, The Trainer Firing of the Year Eclipse ® went to Mattress Mack. Because Mack wanted to thank each and every trainer who ever worked for him, his speech went too long. When ESPN's Jeanine Edwards tried to get him off the stage, Mack demanded she be replaced with Laura Wohlers.

The Legal Move of the Year Award ®, presented by Shwartz and Davis, personal injury attorney (where no accident is ever really an accident ™)  went to Scott Daruty. By suing a reseller, he sent a signal to all potential horse racing partners who want to promote the racing product they better not invest time or money in the sport. Hold it, that's bad right? Whatev's, he goes home with the hardware.

Trainer of the Year ® is a mystery. The Equibase boys were on hand to present, but they asked the crowd for $8 to see the winner. No one ponied up (a bit of a clever play on words there, I know, but I am a professional blogger) and we never found out who won. Most thought it was Baffert, but the DRF's Marcus Hersh thought it was a slam dunk for Karl Broberg.

Moment of the Year ® was the big shocker this year. With a Triple Crown winner, everyone expected it to be the Belmont, but the award was picked and presented by Pete from Brooklyn. Pete chose the 4th at Turfway in February, where he hit a superfecta that paid $454.40 for a dime. "Big score", said Pete, as he walked off with his own award, leaving the audience speechless.

At this point there was a break in the show for an auction to benefit horse rescue. Someone dropped the ball and didn't have anything to auction off, so the crowd was scoured for anything auctionable. The sales topper was a Todd Pletcher tie that went for $250 to Chad Brown. Pletcher told Chad he got a good deal because that's half off retail.

Donation of the Year Award ® was next presented. $150,000 was given to NYRA's Chris Kay by Nick Saban on behalf of the college football playoffs, for restitution for lost Belmont handle. Kay thanked the legendary coach and told him the money will go to executive bonuses.

Next up, the Executive of the Year ® was presented to the Jockey Club's Jim Gagliano. What's an awards show without politics, eh, and that's what the crowd got. Jim accepted the award fine, but then threw off his coat, injected himself with lasix, and began running around the room in his winged tips, while over again saying "look.... not tired...... performance enhancer." To this observer, it was way more powerful than any Sean Penn save the rainforest speech. 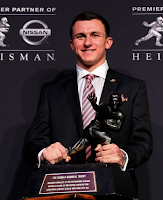 The Entertainer of the Year Award ® presented by Andy Asaro went to the California Horse Racing Board. "I didn't know the meetings were entertainment" said one board member, but he happily accepted it and promised to do the same thing they've been doing for the last half century at meetings.

There was then a short commercial break. Sid Fernando showed a video of a whole bunch of horses having sex. Everyone seemed strangely entertained, especially the breeders. Jim Gagliano was still running.

I took a short break from bussing tables and presented the Race of the Year ® next. The envelope said it was the King's Bishop, but I said screw it and told the crowd it was the Runhappy maiden win.

Last up was the Horse of the Year ® award. It was American Pharoah! The crowd went wild. In his acceptance speech, majority owner Mr. Zayat said it was a joy to race him for the fans, because there was no scenario they ever would've raced him unless it was for the fans. None, not even one.

At that point the show was over. 15 minutes later Jim Gagliano hit the showers and not even a mouse was left in the room. I hope y'all had a good a time as I did.

at January 15, 2016
Email ThisBlogThis!Share to TwitterShare to FacebookShare to Pinterest

Amazing mockery, but my laughter turned to sadness, when I realized
how blinkered racing "leaders" are.

Please keep on jabbing them.