On Saturday, ESPN's Kenny Mayne called a race at Santa Anita. Y'know, one of those celebrity race calls (although I would expect Kenny would cringe being called a celebrity), where the sport gets a little free press on a nondescript field of claimers, or maiden claimers.

What followed, in some quarters, was a hand-wringing exercise. How does this really help the sport!? It's a mockery! This glosses over real problems! Racing needs to concentrate on fixing racing, not on stunts!


And, in retrospect, I guess it shouldn't have surprised me, as last year I was told by a highly placed and nationally respected racing official from one of the leading racing jurisdictions in North America that no appetite to stop cheating with drugs existed at any level in his locale. I have known this official since I first came into racing and know him as a man of integrity and action, so when he uttered his pronouncement, I guess I should have taken it at face value.

Last week, I came to the irrefutable conclusion that even if I had been successful in my private quest to point out to racing officials which horsemen were cheating, what they were cheating with, when they were treating their horses, where they acquired their illegal drugs from—the whole ball of wax laid in their laps—that absolutely nothing was going to happen.

Barry is telling you, me and the thousands of fenceposts that read the Paulick Report, that he has no faith in racing's current leadership. That he has no hope they will ever do, or maybe more apt, can do the right thing. He wants change.

What both camps are saying: Whether it's about pricing,  or lasix, or drugs, on-track promotions, or something as inconsequential and silly as a celebrity race call --- it has to be a bad decision, because the people leading the sport aren't really leading the sport.  And there is no hope they will ever have the leadership to fix the problems.

In a sport losing market share, with foal crop declines, handle declines and the ever-present dependence on alternative gaming to keep it floating, that kind of argument resonates, and it rears its head in many places.

Selfies at a track are a waste of money, while tailgate parties selfies are great, Dennis Miller in a Monday Night Football booth is worth a try, Kenny Mayne calling a race is sacrilege. If racing was big and growing, and the NFL was losing market share rapidly, those would be flipped on their ear.

Racing does have a leadership problem, and it possesses systemic difficulties that make even the best leadership look feckless. But every decision the sport makes is not necessarily wrong. Each idea or policy has to be looked at on merit, not on confirmation bias based on the current state of the sport.

The Big M has been trying some new things this meet, and they were looked at in HRU, page 3 (pdf). 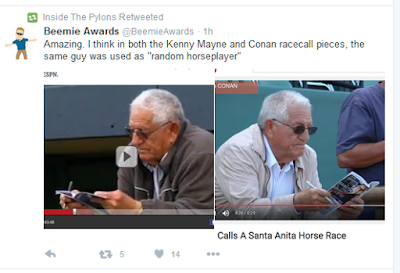 Massachusetts state lottery had handle go up again in 2014 while lowering juice. Ya, but those are lottery players, not horse racing bettors! Whoops, the argument is usually used the other way around. Tres obv - look at the guy above, when he cashes $42 instead of $34 on an exacta, he's coming back tomorrow and betting the extra eight bucks.

Trainers banned for cobalt use for years in Australia. In the US it's tied up in court for years.

The fax machine and the internet helped productivity and changed the way the world did business. Twitter on the other hand, didn't, but when things got you down, it helps.


at January 20, 2016
Email ThisBlogThis!Share to TwitterShare to FacebookShare to Pinterest