The Donn, Songbird, Big Margin Beyer Anger ®, Sports Betting and What Racing Can Learn From It

Yesterday's Donn card was successful from a handle standpoint - around $20 million - and I thought it was deserved. It was a good deep card with a lot of interesting races. The public took a bath with the Pizza Man and Keen Ice both missing the board. The former I thought was flat again, the latter raced well, but was up against it. Both horses on paper were overbet, allowing regular players to find value, which is the name of the game.

As for Keen Ice, to me he feels like a really solid ten furlong horse, which is rare in the sport nowadays. I have always respected him and I hope he has a good year.

Songbird grabbed an easy lead, and strolled home against a suspect field at 1-9. Races like that - especially early season ones - often result in a fun horse racing phenomenon.

When we see a horse who should win easy, win by a large margin, most go giddy at the margin, and the dominance. Then - oh oh - the Beyer comes out weak. At that point we generally see an apoplectic public question Andy Beyer's sanity.

Horse racing is a super-fun game. It's a great sport for watching horses run; comparing them to others; wondering if we're seeing a great, or only a good horse. Early in the year it's much better to take a breath. Songbird is a nice filly who dominated a BC field with a 99 Beyer and came back in a stroll winning by a huge margin for her first start off a break. She could be a good filly or a great filly, but yesterday's race (and arguably the BC, too) sheds no light on which. January comeback efforts at 1-9 rarely do.

She looks sound and happy though, and we see so many hot stars at two look nothing like that early in the 3 year old year, so she passed the first hurdle with flying colors.

The power of football:

"I won't watch the Derby because I hate horse racing, but I'll watch the tweets and my bet is on Mister Frisky.", will never be heard. In Australia for Melbourne Cup day, it probably is heard at times. That race is part of the culture there.

Sports betting is growing rapidly, with handles at Vegas casinos up 8.4% last year alone. Over double the cash will be bet on the Super Bowl this year, than was in 2003, and (illegally) about $4B alone is expected to be bet on today's Big Game. 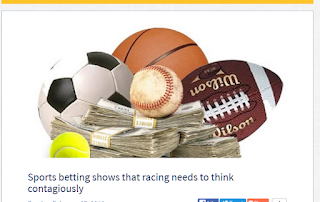 "Racing must come to grips with the fact that people are not falling all over themselves any longer to bet into 25 per cent takeouts in a pari-mutuel system that was invented in 1905. Like with DFS and sports betting, there are complimentary ways to grow market share. The sooner racing looks towards new avenues and mediums for partnerships, rather than looking at them as adversaries, the better. "

The more I dive into the Super Bowl statistics, the more I don't think this game sets up for the Broncos, but I feel Carolina is overbet, much like Keen Ice or the Pizza Man. Horse racing betting and football betting is still just betting. I think I will wait to see if the Denver front five gets some pressure on Cam Newton, where he struggles and go long in-running. The way the OL has been playing since the Atlanta game it probably won't happen, though. Enjoy the game.

Also in HRU this weekend, Finley wrote an article on exchange wagering. It appears the takeout will be 12%. Yes, 12%. I'll have more on that this week.

at February 07, 2016
Email ThisBlogThis!Share to TwitterShare to FacebookShare to Pinterest