The Myth and Reality About Takeout

Canterbury Park announced a huge takeout decrease this morning. The Minnesota oval has been using an alternative gaming deal to primarily support purses and marketing, but this year has sunk some (potential opportunity cost) cash into the customer.


"Canterbury Park has long strived to be the most horsemen-friendly track in the country," said vice president of racing operations Eric Halstrom. "Now, we want to be the most horseplayer-friendly racetrack in America. With the growth in the quality of our racing program we, with the support of our horsemen, are taking the next step and making our races the most profitable wagering opportunity. By changing our takeout to the lowest in the United States, we're giving horseplayers worldwide great value and drawing attention to what is sure to be the finest racing season in Minnesota history." 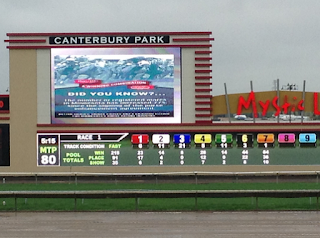 Clearly, gold stars all around to Canterbury. They have been pushing their on-track marketing and become highly successful in that vein, and are now branching towards building that on-track betting base, and giving a jolt to the signal in the simulcast market.

Let's face it, if all tracks used their alternative gaming in this way the last 20 years, I think we all agree the sport - from the fan, the $2 bettor, small owners (and foal crops), to the every day bettor - would be better off. Up to this point, for the most part, money was almost solely sunk into purses and bottom lines of the track. It's why there was such an inflationary spiral in track values, while handle was falling precipitously.

When a track, especially a small one, makes a move like this, sometimes the expectations illustrate a tepid (at best) understanding of takeout.

"If horseplayers don't run out and support the track in big numbers, it's a failure", is a common refrain from non-bettors.

It did not. Horseplayers, en masse, did not make a conscious decision to leave on one day, or in one week, or even in one year. California (as well as other jursidictions) lost market share as the price went up over time. The fact that if California horse racing held its own with the rate of inflation since then handle would be well over $5B in the state, but is only about $3B, has to do with the slow burn, not a raging inferno.

This happens in other games, too. The Massachusetts state lottery used to take out 70 cents of every dollar purchased, but slowly began lowering it to the current approximate 30% takeout. They never advertised it, lottery players didn't say "oh, the takeout moved from 70% to 65%, let's run out and buy lotto tickets! It just happened that over time, returning more to the lotto player allowed them to have a few more bucks into their pockets than they once had, and they replayed.

Today the Massachusetts lottery is the highest grossing and most successful lottery jurisdiction in America.

This is easy to see in working form, in a Canterbury example, with this little graph we saw on twitter today. 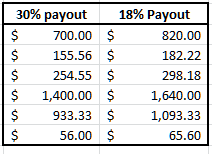 Because you don't physically "see" the takeout decrease, you don't put that $600 in your pocket to take home, it stays on your voucher, or in an ADW account and you rebet.

If it took you $4,000 to hit those tris at Parx, you are a big loser and you possibly say, at some point, "I am tired of losing, I want to try something else" and never come back to the track.

That's the anatomy of a takeout decrease. It's not bells and whistles, it's money in your pocket which makes a difference on how you view your betting experience.

This Canterbury Park move, as others who have tried, is a good one. It's bold and racing needs more of it. But no, just like a poker, or lotto player does, people will not be lined up out the door like it's a Thanksgiving Sale at Best Buy. They will instead be churning away and hopefully, over time, figuring out that racing is a better bet than it has been, and enjoying themselves more. Bettors who enjoy themselves more stick around. Bettors who don't head to the nearest poker table.


at April 19, 2016
Email ThisBlogThis!Share to TwitterShare to FacebookShare to Pinterest

I was glad to hear this bold move from Canterbury park. I have been following the ups and downs of this track since from its first opening. The current management has always been friendly and visionary in running their track. One of the examples of this is when confronted with the competition of nearby Indian casinos they sought out their cooperation in improving the market for both casino and racing. Instead of fighting year after year to get their own casino they choose to negotiate an agreement that benefited both parties. Thus we have seen the racing improve every year over the last few years and I assume the casino has also benefited from the track promoting the nearby casino's attractions to their customers. Since I live in Pennsylvania and have only been to their track several times, I will appreciate the reduction in takeout. As you noted I hope others will take note and support this action and support them at their off track or inter track beting services. Thanks for the article, john Chambers, Lansdowne, PA.