Last evening a gal, or guy, had two horses going into the last leg of the Churchill Jackpot pick 6 for an entire pool shot. If either horse gets up (both were pretty long), this person or persons walks away with three quarters of a million dollars; yep 750 large. This is a life-changing score to any customer, and it's why many of us play the game.

He or she never had a chance.

A cell moved through, and the race was cancelled. The bet carries over to tomorrow.

The Churchill pick 6, seeded with Derby money, has enough bad press already, but this one, frankly, takes the cake. In all my years in this sport, as an owner, breeder and bettor I've seen some crazy things that have worked against the people who pay for purses, but I don't think I've ever seen anything as callous as this towards the sport's customers. The race was cancelled, without any planning, foresight, or even a modicum of respect.

This is not a question of being upset a race is cancelled because of weather and safety. For crying out loud guys, try and think of a better argument; customers don't want to see dead horses, maimed jockeys and a dismembered gate crew.

This is all about what would've been done in this situation if the shoe was on the other foot. 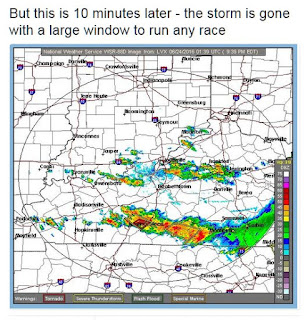 If weather is coming near post time for the Stephen Foster, or Preakness, or say any stakes race where the winner receives $750,000, the executive branch and racing officials spring into action. They would move up post time, or move it back, or wait it out; they'd have some sort of action plan.

Only as a last resort would a race like that ever be cancelled.

That's done, you see, because there are people that own those horses in the 'Mansion'.  They're running for big money. They're racing for black type. They're buddies of people in high places. They're insiders.

The race probably ends up being a go because the show must go on; all hands on deck. We've seen it a hundred times.

For a guy or gal with $750 grand at stake? They're racing for their own kind of black type. But it's, 'let's all go home'. There's no 'let's wait this out', no,'we have pick 5 tickets going and one of our customers has a chance at $750k, we owe it to them to at least try and pull this off', no alternative. Nothing. Just crickets.

For insiders who don't understand the above, I only feel pity, because you are not capable in seeing this is an example of exactly why customers have left this sport for other gambling games, en masse. It's a big reason why the sport is in the shape it's in.

If this was only one example, we could chalk it up to force majeure, or unseen circumstance, but unfortunately it's part of a list so big, you wouldn't be able to fit it in a Melville novel.

Customers in horse racing have the right to feel like they feel, because you keep doing this kind of stuff.

Most tough it out, some just silently leave.

at June 24, 2016
Email ThisBlogThis!Share to TwitterShare to FacebookShare to Pinterest

It's happened 1,000, not 100 times before. Stakes races, important races, any race most times, horsemen are given every opportunity to race.

They saw a pick 6 carryover, gave it ten seconds thought, and everyone went home.

Of course it looks even worse when the track actually benefits financially by canceling.

I doubt track management made the decision without consulting others. Don't judges/stewards, jockeys and the horsemen's association all have a say? Of course, bettors aren't invited to give an opinion. Too bad none of those involved said, "What about the customers?"