Newspapers Might be Finished, But Racing's Strategic Options Make the Big Tracks a "Strong Buy" 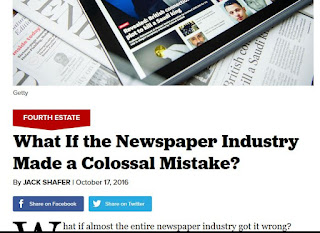 There's a really interesting article I dove through at lunch today by Jack Shafer at Politico.  He looks at a new study from University of Texas researchers who propose that newspapers blew it by moving forward online the way in which they have, and they should retreat to do what they do best - sell print newspapers.

"Buttressed by copious mounds of data and a rigorous, sustained argument, the paper cracks open the watchworks of the newspaper industry to make a convincing case that the tech-heavy Web strategy pursued by most papers has been a bust. The key to the newspaper future might reside in its past and not in smartphones, iPads and VR. “Digital first,” the authors claim, has been a losing proposition for most newspapers."

That smacks a little of what we hear from some out there in horse racing, where retreating to "getting people out to the track" (where margins are higher) is a workable strategy. No doubt the knee-jerk reaction from those in this sport may be,  "see, we have to do the same thing".

I think that's not correct. The quagmire with newspapers is a classic life cycle question. 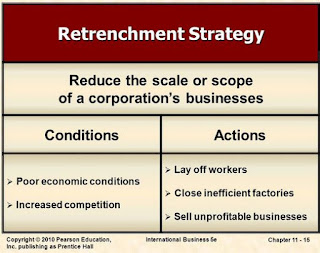 In the University research, the authors contend (although they don't say it) the industry needs to begin a retrenchment business strategy. This strategy (doing what you do best, and diverting revenue to it) is one of three major business strategies for mature businesses who are at the tail end of the life cycle - the other two are harvesting and consolidation.

I am not remotely sold it will work, but the authors believe it's where the business is. And that is super-important. A lot of business have no idea what strategy is right when declining.

As for horse racing, it cannot retrench. Why? Because, frankly, it does nothing best.

For horse racing at slots tracks, harvesting (milking the cow) seems to rule the roost, as sad as that may be. I think these small tracks know exactly where they are, and that's exactly what they do. If 1% of revenues go into something other than purses and profits, I sure haven't seen it. 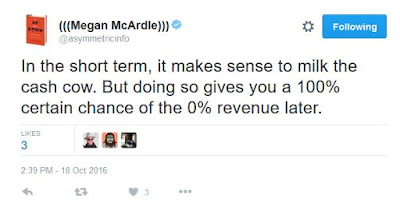 For larger entities and the big tracks that rule the roost, they are certainly not going to retrench, or harvest. Neither of those strategies are remotely optimal.

I think they are going to consolidate. And I say that for more reasons than it's the only choice left that we learn in business school.

A consolidation strategy allows big dogs in an industry to hunker down, and let the competition kill itself off. In the end, the hope is that they will have a stronger position in a weaker industry, but with the industry less competitive, they can grow, and revenues (and margins) can improve.

In real life, a loose example of this would be a NYRA surviving with its three tracks, while Finger Lakes, Batavia, Vernon and other harness tracks fold. Their slot revenue - probably regulated and governed through a department of Agribusiness - would then go to NYRA.

This strategy is often serendipitous, unplanned and in no way normative. I think we're seeing that right now (although, perhaps, a case can be made this is what CDI has been doing for awhile, while divesting from racing).
I think we are seeing a consolidation at the top, and Florida and NYRA tracks are positioning themselves to take advantage of it, whether they know it or not. As for another big dog -  California - I honestly don't know what they're doing.

Newspapers, I think, are dead. Retrenchment won't work, and neither will harvesting. The big dogs will probably survive online and off, so there might be a consolidation strategy at play, but in no way is that consolidation worth as much as it is to horse racing.

If the big tracks in horse racing were an equity, I think they'd be a "strong buy", whether they know it or not.  For fans, owners, trainers and customers, I believe we best get used to it.

at October 18, 2016
Email ThisBlogThis!Share to TwitterShare to FacebookShare to Pinterest

I was in a high margin business and that allowed us to attract outside investment until we became profitable. Eventually, we were profitable enough to attract money from the public markets. We continued to expand with more products and sales channels. Some of our strategies worked and others didn't. But, the key was to have money to try them.

Horseracing is low margin business and it does not draw enough outside or internal investment to grow.

Slots money helps, but it would more than likely appears to be too risky to draw outside investors in.

In the end, it comes down to profitability. And horseracing just does not have it.

That was a long winded way of saying racing is not profitable and it hurts. The game needs to come together to face this as it largest enemy.