It's been a decent election cycle for Mitt Romney.

He called out the Donald personally very early for what he saw was not a good person, when a lot would not touch it, earning him praise. And of course, he was laughed at and mocked incessantly from the mainstream about his Russia comments in 2012, and now everyone concedes he was correct.

That's a pretty good run for a guy who is not even running for dog catcher in 2016.

Meanwhile, I had a dabble into some old horse racing policy last week and came across this little gem from Massachusetts in 2003. 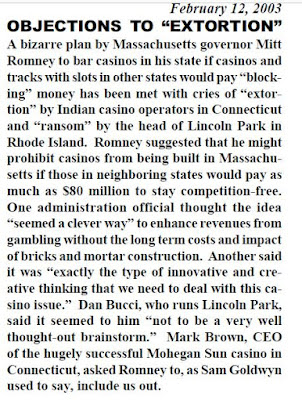 This was a plan that 13 years on looks pretty damn good, too.

Blocking money ended up being paid to racing from Atlantic City in Jersey, but that was intrastate, not interstate.

Currently, racinos tend to only benefit the horse racing inside the states themselves, while neighboring ones either move for more market share by passing more casinos, like New York, or pretty much cut out horse racing altogether, like Massachusetts, or are running on fumes, like present day New Jersey.

Those two strategies are counterproductive.

In Ontario, racinos were scrapped but the public didn't want any more casinos. The appetite for them are growing smaller and smaller. Not in my backyard is alive and well. Good luck getting a racino built now.

Even if you do get one passed, the casino arms race has hurt revenues appreciably. Gross revenue might be higher, but the future looks bleaker and bleaker with government interference, and saturation is the current buzzword.

Years ago, New York would've paid Jersey (they don't want one near Manhattan) racing for a non-compete. So would Pennsylvania, at least Pocono. Casinos in Connecticut and elsewhere in New England would've paid similar to Massachusetts.

Those deals would be alive today and would've likely allowed Suffolk, the Meadowlands and Monmouth to be in pretty decent shape. There'd be no referendum in North Jersey, no issues about Suffolk getting a casino for horse racing. Why bother, they already have the money.

at October 27, 2016
Email ThisBlogThis!Share to TwitterShare to FacebookShare to Pinterest