Trust But Verify, Horse of the Year Chatter

Crunk and I had a twitter chat awhile back about the connections of top horses, and their thoughts when comparing horse A to horse B, where one (or even both of them) are their horses. In effect, we proclaimed we put little faith in these thoughts, and look towards speed figures, head to head match-ups, tops, bottoms and comparing performances to other historical horses to judge.

Generally, in cases like that, it comes down to trust but verify, because trusting alone sometimes involves some serious astroturfing.

Today, Bob Ehalt wrote the ultimate sausage making article about American Pharoah's big Triple Crown year. It is (in my view) one of the best articles you'll ever read about the inside-out's of the business.

In one part, we learn quite a bit about when a jock (driver) talks about a horse being better than another, or the best ever:
Chrome might very well be better than American Pharoah, or he might not. For that we have figures, and comparisons and our handicapping judgement. But that's where, in my view, the analysis should probably end. 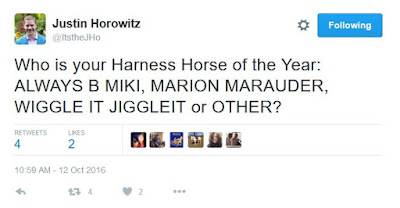 This year is harder than most.

Marion Marauder is up against it, despite winning the Triple Crown, through no fault of his own, really. Glidemaster won the Triple and Horse of the Year in 2006, because the cupboard wasn't really stuffed (horses like Total Truth and Darlin's Delight were not generational). His main foe, who had every bit as much talent, did not win enough of those big races against him either.

In 2004, Triple Crown winner Windsong's Legacy ended up losing Horse of the Year for a pretty good reason - Rainbow Blue. I remember lobbying hard for the mare that year, because, well, she was pretty special.

This year is much like 2004 but you have have not one, but two horses who are pretty darn fast - Miki and Wiggle It.

When both have similar resumes (Wiggle's numbers could be padded with restricted 4YO stakes, so he raced more and won more money), in my view, you always have to lean to who was the faster horse, when both are firing on all cylinders.

Wiggle had some down weeks (he lost to Rockin' Ron twice) and Miki was softer, and less sharp in August, but when both were at the top of their games (the two weeks of the Franklin, for example), I think Miki proved he was the better horse. You don't make a half mile brush and crush, get rebuffed and still somehow win the race without being much better. That's a tell tale mile.

There are still some weeks left in the calendar, but right now, Miki is my choice.

Have a nice Wednesday everyone!

at October 12, 2016
Email ThisBlogThis!Share to TwitterShare to FacebookShare to Pinterest