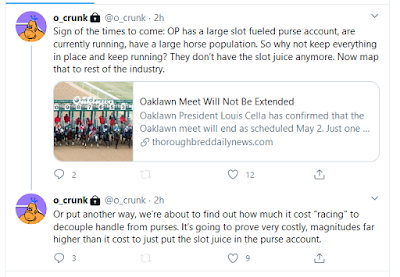 "First we have no purse money left", said the Oaklawn President on why the meet can not be extended. Projecting  little of what we spoke about a few days ago, i.e. "With no slot money, where will purse money come from."

As Crunk ably notes here, "we're going to find out how much it cost racing to decouple handle from purses."

He's probably - barring something unforeseen with reopenings - correct. We're in a very troubled time in terms of long term funding for purses.

Switching gears away from the sports' dependence on slots and missed opportunities related to this money, I've been thinking about diversification.

As you probably know, diversification is a business strategy where a company lowers business risk by having several revenue streams rather than just one. If one goes poof, you have something else to lean on.

When Sharp - who made radios - switched to CRT's televisions and screens (and invested million to pivot) it was a success, but that was in the 1960's. Canon, who saw some writing on the wall with their camera business, produced copiers using their tech, and thrived as Xerox was only in the lease market to big business.

Over the last thirty or forty years, though, where the economies and business changed to comparative advantage on just about everything (companies lower costs and offer products cheaply by being super-good at one thing) this has been less talked about.

But racing is in a highly regulated market. They're not selling copiers and they are likely (or more accurately were) in a better position to meet the rules of diversification for expansion. They have an edge.

Here are a couple that come to mind -
There's been a lot of talk of late about what government was prepared for what, when, as related to the virus. We can probably safely say most, if not all, were under-prepared for a pandemic. And not preparing for something with limited budgets and so much happening daily is not uncommon.

For horse racing it isn't uncommon either. We worry more about a $30,000 purse being cut to $28,000 tomorrow, rather than what it will be five years from now. However, when we see slots go (potentially) poof this year and decoupling causing so many issues, isn't it time to prepare? Isn't it time to build more diverse revenue streams with everything the sport has been afforded?

at April 15, 2020
Email ThisBlogThis!Share to TwitterShare to FacebookShare to Pinterest