In trying to make the BC a worldwide event, Betfair was licensed as a partner this year for the first time. It seems it has worked if the first race is any indication. Here is a screen shot (click to enlarge and note: I will update a few things here in this post during the races if you are interested). 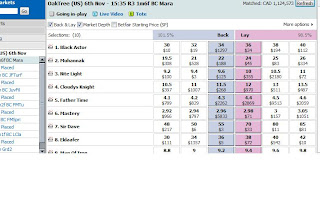 Only $200,000 or so was bet in-running, more than likely due to a slight delay on the feed. However, over $1.3M was matched on this event dwarfs what was bet last year. The markets were super-deep, reminding one of the UK races that these punters normally flock to. I believe this is brand building, going on right before our eyes.

The 4th race on the card had some huge volume as well. With only a 1.8% overround and a well traded chalk (Lillie Langtree) there were several opps to trade and overseas players took advantage of that. Here is a screen shot of the inplay (around the three quarters). Lillie Langtry was even money when she made her move and a nano-second later when she looked to flatten she moved to 4-1. She dove from there. Note the winner was 14-1 at this time. $1.5M ended up being matched on the event. Tapitsfly closed at 14.5-1 there before in running, for a $31 mutuel. 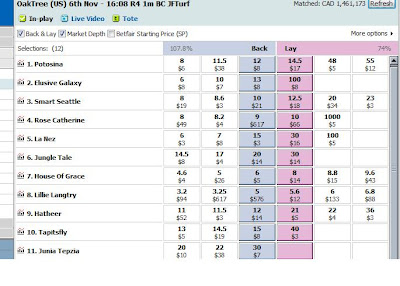 Only $800k bet in the 2YO F BC race, singnaling perhaps the US based race that this tends to be. In-running trading on the winner was good (screen shot below) and you could have had her at a nice price. Funnily enough I did not think she was traveling great so I don't think I would have taken a poke on her in-running. 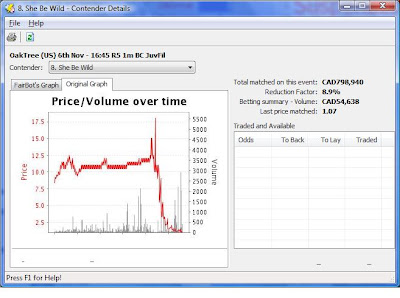 Back to the Turf and the UK bettors were back betting in race 6. About $1.4M matched, a few hundred K of it in-running. I wonder if this race might beat the Filly and Mare Classic. We'll see in a couple races.

For the Filly and Mare sprint the presence of the Ventura trading upped the handle precipitously. About $1.5M matched here, with most of it on her. There was again deep depth on almost all the horses. There was about $600 willing to lay Free Flying Soul at 60-1. Last year you would simply not see that volume. Of note in this race, the winner looked never to be threatened, however in running pricing had her fairly generous. Even close to the wire where she clearly had no shot to lose there were trickles available at about 2-5. She closed with money on the bid at 1.02, or close to 2% on your money on a horse who would need to be DQ'd or hit by lightning to lose.

In the days big one, $1.4M matched and an interesting in-running brigade. Would she or won't she? That was the question about Careless Jewel. For the first half of the race punters were hammering..... for the last half... not so much.

Fascinating day and a wonderful card to handicap.

Now I just have to get some winners.
at November 06, 2009
Email ThisBlogThis!Share to TwitterShare to FacebookShare to Pinterest

The major factors for UK punters will be are there horses we know in the field, and how short is the favourite. There will be plenty of traders in the market simply backing & laying the fav as its price moves, only one ot two ticks, to lock in a profit. Remember - exchange volume does not equal tote handle. Tote handle is all one way - backing. If you took all the risked cash on the table from exchange players, it would only be a fraction of what is shown as matched volume. And besides, whether Betfair were licensed or not, means nothing to this market, they'd still be betting on it on Betfair anyway.

The real change comes from how much they add to the tote pools, which won't come out until later - assuming it's impressive enough to announce. With big exotic pools, I'd be surprised if it wasn't.

Most certainly on the low shots, however after following this since I think 2002 I have not seen so much depth on all horses for the BC. About $4000 on the top end for the two horse there and a couple thousand on bombs like the one. That is unusual for this event as far as I have seen.

To give you an idea of what some traders put through on these markets here is what I did on the Breeders Cup Turf (Race 8 on Sunday):

I would class myself as a medium to small trader. There would be traders who put much much more through the markets than I did.

Hope this of interest.