Saturday's victory in the North America Cup was more than just a win for Mark MacDonald. As most know, Mark was taken off the horse this spring, after driving him well last year. It was a business decision made by the connections (who we are not sure), but they wanted driver Brian Sears instead. It was a curious decision to some - Mark Mac is a world class driver, capable of winning and in fact has won, races like the Jug. Any bettor with a modicum of skill will tell you he is one of the best out there. Others could see the logic in it.

However, the plan did not go to plan, and Mark Mac ended up retaining the drive for the big one. He did a bang-up job and took home all the marbles.

In today's Guelph Mercury Mark was asked about the firing:

“It was heartbreaking. I’m not going to lie to you, it was a tough winter. I got divorced this year then I got that e-mail that they were taking me off the horse. It was like a punch in the stomach,”

But, clearly not lacking in pride, Mark said: “I believe you make your own luck and instead of feeling sorry for myself I got back out there, I started working out in the gym three or four days a week and racing at all the B tracks again. You know what? I guess hard work sometimes does pay off.”

I have spoken with Mark before and he drove a couple of our horses. I like him, so I am biased. I think he deserves all of his success because he works hard and generally tries to do right for the owner and the horse. Maybe some disagree, but that's the way I feel. I was happy for him.

In other NA Cup notes, Noel Daley, trainer of All Speed Hanover, who came last, told Harnessracing.com that his charge will be fine for the Meadowlands Pace, offering no other details.

NA Cup handle was up this past year. Any "up" in harness racing is a good thing.

VFTRG has a look at Wednesday's racing at the Big M. It is an eight race card. Yep, eight races, and not your average M races. The Meadowlands needs an intervention; and fast. 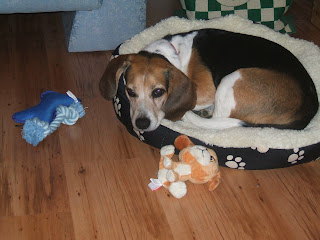 Note: Do you mind a personal shout out to of all things, a grocery store? Sobey's is an east coast food chain and they have supported harness racing by sponsoring the Sobey's Gold Cup and Saucer in pure racing country - Prince Edward Island (my trip to it last year is here). Well I found out another thing. They are also pretty good citizens for another four legged animal - dogs. I am currently fostering a pup and along with the dog comes some food. The food itself is damaged and not for resale; and Sobey's donates it to animal rescues, where this guy came from. Sorry for the off-topic post but I know this fella (and the pictured pooch) appreciates them.
at June 28, 2010
Email ThisBlogThis!Share to TwitterShare to FacebookShare to Pinterest

I was just wondering...how much higher is the divorce rate in harness racing than the national average?