The Rising Costs of Horse Ownership & Doing the Right Thing 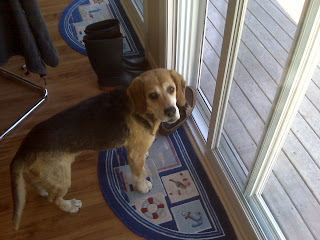 About two months ago I went to a dog pound website and saw a pooch listed. They thought he was eight to ten years old. He was found wandering the streets. His teeth were black, he had a limp in his back hind and his right front, he had little back-end muscle, he had a bad cough, he was not fixed and he was underweight. The awesome folks at the pound, and the vets who give up their time for free, did a great job with him and diagnosed some of his problems.

He had a torn ligament in his leg and his right front had some problems from over-compensating. They estimate he had this issue for many years. With only a (hopeful) few years of life left, where he would at the very least need to be medicated and so on to live happily, he was not exactly a candidate for an easy adoption.

After inquiring about him several times over the phone, we went and saw him about six weeks ago. He was simply the kindest dog you would ever want to meet. We were sold and brought him home.

I then went to work. I had to research this as much as I could - could he get surgery for his limp, could he have supplements and drugs to help him live a good life, what kind of food can we give him to help him gain weight and be stronger? We took him to two vets, got his blood done and converted some of this research. There were some things that could help the little fella.

First he needed anti-biotics, then daily pain meds. Then I found some supplements for his joints and some treats with something organic in them that people tell me helps. I found some really good food for the guy which was a specialty brand and is supposed to take care of many of his nutritional issues (it was funny going to the vet for a dog and have her read me his bloods - I only get to see that with horses!*). He'd need this for the rest of his life, and the jury is still out on what else he might need.

At the present time he is doing a lot better (he can get up stairs alone now and can jump, not waddle onto the couch) and I would do it all over again, but it is not exactly inexpensive. I wanted to do everything I possibly could to help this mutt (I think it is from being a competitive horseplaying type.... I really want to win, and I really like animals).

What does this have to do with horse ownership? I think everything. And I think it is why our costs as horse owners have gone through the roof and purse increases like we see at a lot of slots tracks, or this year in California for the thoroughbreds, never do the job.

One of our trainers is competitive like me. He loses sleep over the slightest item with his horses, he scours the net looking for anything that can help them with their diet, or what-have-you (2AM barn visits when a horse is sick is not uncommon, it is expected). He also wants to do it like most of the horsepeople in racing; above board. I called once before a race and he said "we're at the spa", as the horse was getting a pre-race bath in a salt water equine clinic. I had a laugh when I watched Blame getting the same bath the morning of the Breeders Cup Classic. It's not only for multi-million dollar animals.

I will often hear "this supplement costs a ton but it really helps them feel better after training", or "there is a cheap knock-off of this vitamin, but I am convinced the real one does better", or "I was reading an article on track and field and this person said...." and so on.

It is this type of thing that is common-place in racing. If we read an article on Zenyatta I know John Shirreffs would get along with this fella. He speaks of placing aloe in her food, of giving massages, salt water baths and having "14 people touch her". People like John want to win, and they want to do it the right way. And of course, they are sometimes competing with people who want to win, but want a vet to win it for them - legally, or by taking the dark side (I believe that the horsemanship knowledge of your trainer is inversely correlated to the size of the vet bill; try it sometime).

The end point of this is I will spare little expense to get my pup healthy, and horsepeople will spare little expense getting their horse healthy. Unlike my dog, I have money in my bank account and am not worried about where my next meal is coming from, and he does not have to worry about being a tool to run a business. He does not have to race, he sleeps on the couch. But horses do, and that is where the purses come in.

Some of the things that John does for his horse's and my trainer does with his, cost serious cash. There is always something to spend money on to keep up with your neighbor, or with those who choose the dark side. And because of the need to make money, the love of the animal and the way the business is, purses can skyrocket, but people seem to stagnate. It is just like the 1970's in racing - despite massive purse increases, everyone still seems to be searching for the home-run horse to stay afloat.

It would be fine if this was only inflationary, but it is not - it is hyper-inflationary. And it eats every purse increase.

Is there a solution? I have often thought that horseman groups (some of them often very militant and strident) should have been working with tracks to somehow get these costs under control. I am not sure how, or if it would work, but having track vets be able to sell prescriptions cheaper, or having joint meds etc that cost $40 but are marked up to $150 available at a racetrack at bulk prices, might be some things that can help. Investing some slots cash in this might be an option.

Until then, in my opinion, when a purse increase happens there is a corresponding increase in monthly costs and we get nowhere. It is a vicious circle; one that hopefully one day will be closed, because unlike my beagle, this is a business that needs a future. Horse racing is a subsidized business, but it should not be one where the subsidy goes in full to Adequan makers, vets, and people who rent hyperbaric chambers; it should go to horse owners and trainers as well.

* An interesting note to horse owners, and dog owners who might need it. A full blood panel for a horse near Woodbine is around $50. For a dog with my vet? $174.
at November 22, 2010
Email ThisBlogThis!Share to TwitterShare to FacebookShare to Pinterest

It was rumored that in Jersey before getting nabbed with EPO, bills for Ledford were above $6000 a month. That had to be a red flag to any owner, but maybe when you win all those races at 40% you turn a blind eye to logic.

Very good points, and lots more examples around. E.g., Gastrogard runs $15 a day; there are generics and substitutes, but they don't seem to do as well. So it's partly the same prescription-drug pricing issue that affects human health care, and partly the monopoly that vets have on dispensing the medications. Bulk purchasing by tracks would work only if the tracks then employed a vet licensed to administer the meds.

Funny you mention gastroguard as I have heard the same thing as well about the knock-offs. $15 a day and if you have seven head that can add up to many thousands a month. If two of your stock is sick, two on the mend for something and the other three get in twice a month, they better be winning races, or you are fast-broke.