Create Products That Open Your Markets

There was a time we were unable to invest or partake in different markets, but that day is long gone. High commissions and protective rules are no longer something that markets need to deal with - they have been shot down - because the money from people who might be looking for you, is everything.

In the case of gold and other precious metals - the current hedge against paper risk - the floodgates that opened were welcomed by investors.

ETF's, or exchange traded funds, have been around for some time. No longer do you have to own a warehouse, and hire a security team to store and own the bricks. And it's worldwide.
The market has taken off.

Conversely, what we see in horse racing has been the exact opposite. We have tracks protecting a signal from offshore's like it's platinum. We have tracks trying to operate their own ADWs under arcane rules and little marketing - like somehow people will flock to open an account and bet our sport with both fists.

Here is a popular ADW and what strangeholds them in trying to do business. It's their residency requirement. 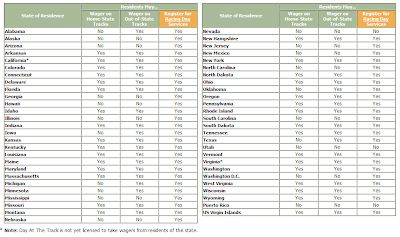 You can buy an ounce of platinum, that was mined in northern Russia, stored in the south of France, all while sitting behind a computer screen in your pajama's in Arizona. But if you want to make a horse bet, you have to jump through a hoop that a dolphin looking for a fish would. And even then you'd be likely not be able to, for some strange reason.

Unless racing opens its markets, and creates products and a delivery system that welcomes customers - and doesn't discourage them - the rest of the world will continue to leave us in their wake.
at September 14, 2011
Email ThisBlogThis!Share to TwitterShare to FacebookShare to Pinterest

I admire your tenacity. Racing is run by horsemen groups who don't think like you or me.

I am back to the markets tomorrow. I'm trading GLD- an ETF that I never would have ever traded in year's past.

Actually, I like The Red Mile account, which I wish I could open an account with (my state has a monopoly for one service). They have nice rebates (IMO) for a racetrack for those who bet under $30,000 a month and higher rebates for those who bet more than that monthly. I had checked their website and they partner with a traditional ADW to offer the service.

Each state has their own horsemen contracts ... that throws a major wrench into doing things right. It's a system built in 1978; and nobody wants to do the right thing to fix 'er up. It's why we have insane rules, prohibiting growth.