First, the Forest City Pace is on tap for Saturday at Western Fair. It's not too often you get to see a Breeders Crown champ at Western Fair, fresh off the big 149.1 win, but we do. And, she has the dreaded seven post, which should make this a very interesting race. Greg Blanchard has his youtube preview and I have linked it below; give it a watch as he runs down the excellent pick 4 sequence. Programs et al, are here. 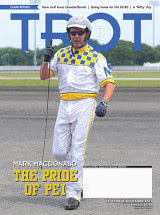 Second up, Keith McCalmont's piece on trainer Nick Boyd is out on the Trot website. Nick discusses the Risky Business TV show with billionaire Brett Wilson, and the state of the game in his opinion. HANA added his comments on their blog tonight, because it is fairly rare to hear a trainer, or industry participant speak of the bettor.

Not long after Nick began his training journey, he wrote about his outlook here on the blog. You can read it by clicking here.

Andrew Cohen's swan song at Harness Racing Update was good today. He speaks of a few things o_crunk and I were speaking about on Twitter yesterday - namely, how did we let it get like this?

It's been several months and one of our horse's still needs a retirement home. He lives around Milton right now, but he really needs someone to be his buddy for the rest of his days. He's ten, he's sound and he likes carrots. If anyone is interested please email me at Pullthepocket@gmail.com. The only condition is you can't race him anymore.

Jack Welch once said that he wants managers that fear not to change, rather those who fear change.   I took a seminar on "the dip" today. It involved how companies that change rarely get it right the first time, and there is a dip before you can grow again. I thought of racing. We have our own dip, but we never changed to get it. Like a lot of businesses who fear change that needs change, it happened all on its own.

"Woodbine Keen to Add Sports Betting."  Good for Woodbine, but what a churn killer for horseplayers.

John Pricci wrote today that he wishes racetrack executives would play their own yearly salary into the pools at full boat rakes to see how impossible racing is. He's right. He also spoke of some of the very good work Lenny is doing at Equinometry about studying takeout changes.

There is some interesting chatter on the Dan Patch Awards of late. Casie Coleman has been lobbying for her horse to be voted over Roll With Joe. Ray Schnittker told Harness Racing Update that his filly should win Horse of the Year over San Pail. I think Ray and Casie should buy a horse together and call it "Say What?".

I don't know why there is so much chatter in the US as well on Horse of the Year. Havre De Grace is a big favorite to win, and probably deserves to win.  People seem to be talking like this is some sort of tough decision this year. I guess because a girl won it last year, and she's not as good as that girl?

I watched "Mad Money" on CNBC yesterday and Jim was teaching newbies Fibonacci retracements, and chart theory. We use "racing is too complex" as a crutch why we can't grow.

Great story II - Visit the So Cal Thoroughbred Rescue homepage and marvel at the before and after photos. Well done!

And have a great evening.


at November 24, 2011
Email ThisBlogThis!Share to TwitterShare to FacebookShare to Pinterest