There's Not Much Left But the Bettor

I came across an interesting chart tonight on music sales revenue: 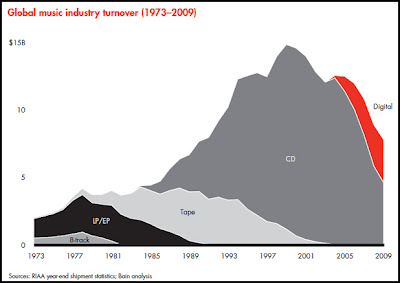 The graph is fairly self-explanatory.  In the late 1980's to around the year 2000, CD sales were a positive innovation for revenues. They sounded better, lasted longer and were much more expensive. Add the fact that all the previously sold tapes and LP's would have to be rebought again to fill out your collection, and we've got ourselves a big bubble.

In 2000, along came digital music, with marginal costs that approached free. The bubble was broken and sales revenue went down. Sure people once again rebought old tunes, but they weren't paying $20 for ten songs in a shiny package, sometimes with nine of them they didn't even like. They were paying 99 cents at a website near their fingertips.

This chart is not unlike a chart for racing's core revenues. We too were in a bubble that when shocked (some would say finally made fair for competitors) finally burst. There was nowhere, or nothing else, in many towns and cities across North America to gamble on in a legal way. When that changed, racing found it difficult to compete, and handle was lost.

That is where the similarity ends. The music industry could fight their revenue losses in myriad ways. Because album or CD sales were not the be all and end all, and their entertainers were worth something, they could thrive. Music is heard by more people than ever before because of digital downloads and youtube. With cheap pricing and cheap broadband comes more supply, and more demand. Concert revenues can grow, as can sponsorship of tours. This is, in part, why despite the curve above, total worldwide music revenues has grown every year since 2000 and now stands at almost $68B.

If racing followed the same path we would have seen the handle bubble burst, but we'd shift to alternate forms of horse racing revenue to make up the losses. The problem with that, is that there are no other sources of horse racing revenue. We pay networks to show us not the other way around. People won't pay $160 to watch horse's run around in a circle like they do to watch Bono sing around in a circle. We can't sell a jockey's jersey for $97 either.

We're left only with the bettor. That's it.

So far (I don't think it's a stretch to say) we have not embraced growing new bettors and keeping our old ones happy. We haven't cultivated them like online stock trading firms do their customers. We haven't offered them new ways to play, like an exchange. We haven't lowered prices for them - in fact, in places like California we have done just the opposite.

That's probably because we have been given slots for a little while and the subsidy has eased the pain, as most subsidies do.

But sooner or later, all that's left will be the bettor. When they ask why they should continue to patronize our sport, or tell friends to join and support the industry to help it grow again, we'd better have an answer for them.


at November 13, 2011
Email ThisBlogThis!Share to TwitterShare to FacebookShare to Pinterest

If the industry continues to ignore its patrons big purses and mega-stables were die. The game won't. Somebody will always be running their horses against somebody else somewhere and we'll have our money down. What do I care about purse money - I don't get a cut.