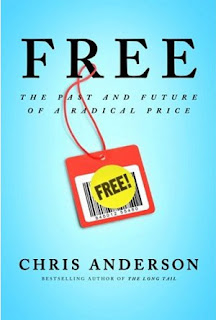 Throughout the early part of the decade (and continuing to this day), the response from racing with regards to offshore websites is one of pure vitriol. They have spent countless time and plenty of money trying to do away with them. Of course they had a point: these sites were taking bets on racing, without paying for the signal. Even today, despite rules and regulations, as well as acts of Congress like the UIGEA, which prohibit this wagering, it is brought up time and again.

At wagering conferences, on this blog, and in general discussions with my betting friends, I often have put forth the argument that shutting these places down will do (or has done) nothing positive for handle. In fact, I believe that shutting them down (and not looking to work with them in some way) might actually hurt the industry; doing exactly the opposite of what was intended.

The reason I had that view, was because "Free" is a business model in the 21st century.

In the book of the same name (I am re-reading it now, which spawned Sunday's post), Chris Anderson of wired looked at the free economy in China, as it pertains to knock off purses, shoes and watches - you know, the stuff that's in the back of a Yonge Street or Canal Street shop, that no one is supposed to know about. In China this market is pretty much the entire market. As an example, if a star is seen with a new Gucci bag in a snapshot at an awards show, the bag will be mass-produced in China as a knock-off before Gucci even mass produces them for sale. It's a huge part of the economy.

It turns out that the middle class in China is growing leaps and bounds and they are the primary market for the pirated products (mainly young women). They want the real bag or shoes, but they can't afford it right now. Anderson referenced a survey done in 2007 that showed young women - by an overwhelming majority - would save four months salary just to own a Gucci bag because the sub-culture of these items had been ingrained into them on the streets of their town, and elsewhere. In effect, the pirated items lit a fire inside them.

Over the next several years as China's economy grew and many of these young women began to become upwardly mobile, sales of the real things grew as well.
This concept lies inside a theory called the "piracy paradox". When we think about it, it makes perfect sense.

In racing, when offshore sites were shut down via the UIGEA and now are doing a small fraction of the handle of earlier this decade, one would think all would be well. Racing handles should be growing, shouldn't they, as this money comes back into the pools? It hasn't. Not even close.

I believe this has not happened because racing has its own piracy paradox.

People who used offshore sites did so because of a few benefits:
This was exemplified in a comment right here on this blog from an offshore player several years ago:
Shutting down his offshore site did not bring him back to racing, it made him an ex-bettor. Multiply this gentleman by a thousand, or ten thousand, and we have ourselves a paradox, and lost handle.

What offshore sites did was keep people interested in racing, and I think what they siphoned out of the pools was made up in eyeballs, and ancillary wagering.

If a pick 6 with a massive carryover came up, they would be there to play in the pools (offshore sites would not accept a pick 6 wager). With some offshore sites having capped payoffs in many bets, and no ten cent wagers, these folks would keep an on-shore account to play those too. And so on.

It kept them betting into the pools, supporting purses and profits.

Shutting them down was not wrong. It just didn't help us much, and it probably hurt us.

Racing must find a way to engage the people who are no longer playing our sport by attacking what they don't like, or didn't like in the first place. The concept of "Free" is one way to do it, but Free is a bad word in our game (just look at tracks and horsemen asking for ADW's to be disbanded because they think they don't pay enough, the pure hatred of 5% takeouts at betfair, or new consortiums of protection like Monarch).

We fight to protect our slices, until there are no slices left. The business model needs a drastic review. And possibly a little bit of Free.

at November 15, 2011
Email ThisBlogThis!Share to TwitterShare to FacebookShare to Pinterest