The Thoroughbred Fan's Guide to the Breeders Crown 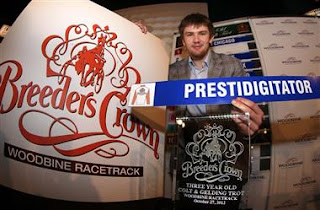 If you are a thoroughbred fan, with nothing to do on Saturday night, here's a guide, with hopefully some references that are understandable :)

The second race of the evening is the 2YO Filly Pace, which is like the Juvenile Fillies. I don't get too excited about the juvenile fillies quite frankly come Breeders Cup time, other than to spectate.

However, in harness racing it can be exciting. Filly pacers have form, and can get better and more seasoned at the end of the year. For example, Somewhereovrtherainbow has really come into her own. She's by Somebeachsomewhere out of Rainbow Blue. That won't mean anything to you, but think of it like a filly by Curlin out of Rachel Alexandra. if you like royally bred horseflesh, cheer for her.

The fourth race is for three year old fillies. There are quite a few good fillies in this race, but it may come down to American Jewel versus Economy Terror. This is like Questing against My Miss Aurelia.

The sixth race is for three year old filly trotters. There's a horse in here that could very well be horse of the year. Her name is Check Me Out. Check Me Out is just like Rachel Alexandra. She has had all the headlines, she has only beaten herself, and everyone and their brother thought she could win the Hambletonian if she entered. She is coming off a shocking defeat.

Race seven is for two year old colt pacers. This is a big race, and is tantamount to the Juvenile. There is a horse in here that is probably like a Favorite Trick and his name is Captain Treacherous. He is a son of one of the fastest horses ever who has become a top sire, and he has push button speed. He can make an Arazi type move and he might be voted Horse of the Year if he wins this by 5 and a half like Favorite Trick did. You want to watch this race if you like horse racing.

Race nine is kind of like a mini-Classic. It's a race for three year old colts. This is probably like a really, really good Travers. Instead of one headliner like Alpha, there are many. The three year olds in harness racing this year are competitive. This should be a fun race. Unlike thoroughbred racing, most of these horses have been knocking heads all year and are around at the end of it.

In race 12 we have a Royal Delta type horse taking on the older males. I think it's the first time it's ever happened. Her name is Put on a Show. She is against nine others, most of them multi millionaires. It caps off a fun evening.

Free programs for the event should be out tomorrow and I'll twinky a link when I see one.


at October 24, 2012
Email ThisBlogThis!Share to TwitterShare to FacebookShare to Pinterest

Interesting about race 12! I always like it when fillies/mares are up to the boys league!