Social Media and the Big Picture 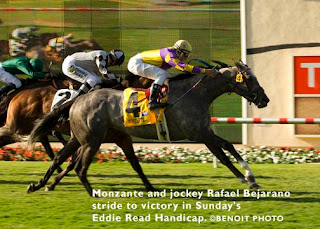 We've seen some social media brouhaha's over the last few years, but none that I can quite remember has ever rivaled the death of Monzante. His euthanization in a low level claimer has prompted calls for just about everything from getting rid of claiming races to NTRA accreditation of all racetracks, to name but two.

I've read a lot of great points from a lot of good people on social media the past 36 hours. People feel passionate about this, and it shows.

A couple of meme's tend to surface at a time like this. In one, some wonder (and use it as a wedge issue) "why is this horse more important than any horse in a low level race that breaks down?"

It's not, of course. What it is, is different.

For horse rescue people and horse lovers this drives a stake through their heart. "If you people can't even ensure a graded stakes winner gets retired before he breaks down at god knows where, why in the hell are we getting up each day to place your other stock for you?"

For racing fans it puts a pall on the game they love.

For people like Waldrop and America's Best Racing and others who are working their ass off to promote the sport, this brings headlines that "racing doesn't care about anything but money" and unravels a lot of good branding work.

Slots tracks are getting hammered - a lot of times like they should - for not doing enough for horse racing. These clippings find their way into some government pinhead's office who puts them in a big book, and when his boss wants to come after racing's share of gaming for schools or health care, there it is.

For horse owners who care about what happens to their stock after they leave the barn, like the owners of Armbro Proposal and Convocation to name but two, it makes them weary as well.

Why was Barbaro's breakdown different than others? Why was Ferdinand any different than others? It's not because people don't care about other breakdowns or slaughter. In fact, it's the exact opposite. Everyone cares about them, and when it's highlighted it brings out tremendous emotion. The sport, the horses they love, their life's work, it's all being challenged.

Barbaro changed the way tracks are cared for - we see more safety and less speed now - and allowed for the Accreditation system to begin. Claiming rules like the very good one (which likely has to be tweaked) are passing without too much criticism in California, which would've never happened earlier this century. This allows for people to stop passing off an unsound animal to an unsuspecting new owner, like we're dealing with a car on Craigslist, not a horse. Last year at Aqueduct the rent a horse phenomenon was stopped in its tracks when unsound horses were showing up in the box with as much frequency as a 13 year old at a Justin Bieber concert. Earlier this decade a portion of the industry's take of handle in Ontario was given to the Thoroughbred and Standardbred adoption societies. That's something that never would've happened previous to stories like this.

If this sport runs with it and even does some small things - like creating a system where the industry and tracks play watchdog and inform previous owners or other interested parties their horse is running off a 12 month layoffs with a garbage work, or shames an owner enough to not drop a nice horse into a 5 claimer to 'get rid of him' like an old shoe, but find him a home instead - it's a positive.

We'll see if the industry, its advertisers, breeders and ecosystem sweeps this off the front page and goes business as usual, or something changes. If I had to bet, I think it's going to be the latter.

at July 23, 2013
Email ThisBlogThis!Share to TwitterShare to FacebookShare to Pinterest

"For horse rescue people and horse lovers this drives a stake through their heart. "If you people can't even ensure a graded stakes winner gets retired before he breaks down at god knows where, why in the hell are we getting up each day to place your other stock for you?""

I'm not sure exactly how it could be done, but it's so important for more owners to be instilled with some sense of personal responsibility for their racehorses. Too many think of them as just a "financial investment" that can be instantly dropped when they prove unprofitable--like dumping bad stocks back on to the market. There is--rightly--a great social stigma to dumping your pet on the side of the road and leaving it to fend for itself--there should be an equal stigma for doing essentially the same thing to horses.

I know a lot of owners simply couldn't afford to provide all their racehorses with a home after they're retired. Well, those people SHOULDN'T OWN RACEHORSES. It would be much better for the game overall if we only had owners who were prepared to take full financial responsibility for their animals.

As I say, I don't know how, practically speaking,this can be done, but somehow it MUST be done. Otherwise, the whole racing game will degenerate into something intolerably ugly.