If You Don't Screw it Up, Handle Can Explode

I remember back many years ago when the Paulick Report was in its infancy; an article was written from the horseman's perspective about internet wagering and ADW's. It was the usual - they don't pay enough, there should only be one ADW controlled by horsemen, etc - and it spawned a response from horseplayers. 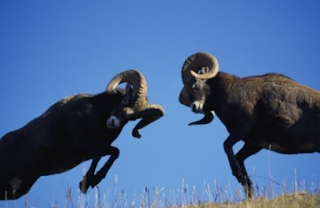 Paulick, never shy from using some interesting imagery, displayed a ram fighting another ram with the headline, "Horseplayers Lock Horns With Horsemen Groups", and printed the response from horseplayers .

The article talked about a few things, many of which you have seen typed here since 2008. Mainly, monopoly markets for internet wagering will not work, and high ADW taxes won't work. They inhibit competition, which stifles innovation, reduces player rewards, reduces advertising and customer growth spend, and sends players offshore.

That article didn't do much to sway opinion, of course.  Racing in North America has Virginia ADW taxes and fees (ironically done in 2009 to save live racing, which there isn't any longer in Virginia), Pennsylvania and New York ADW taxes and fees, and, of course, no exchanges, source market fees and all the rest. A lot of the big tracks refuse to sell their signals to smaller, customer-centric ADW's, too (one of the more under reported problems in this business)

These policies go on today, with impunity. You can barely go a month without seeing that exact same article from a horsemen's perspective written about somewhere.

In some other parts of the world these same polices are tried, but with a central organization that's held accountable, it's a whole lot different.  Things aren't swept under the rug.

The PMU in France, in 2010, imposed high fees, turnover taxes, and didn't allow any firm to offer gross takeout lower than 15%. While participants cheered, the customers and business didn't.

Advertising in the marketplace dropped 58%. Most of it by dropping player rewards.

Competitors, unable to turn a profit, left the marketplace.

Since 2011, despite realizing some of their failures in this policy and trying to correct them, the PMU has lost turnover for three consecutive years in a row.

This is much different than other parts of the world.

Around 2007. Australia opened up their market to give consumers choice; better odds, lower takeout, new ways to bet and better rewards. They, like the horseplayers on the Paulick Report, locked horns with the status-quo, too, but a different result occurred. 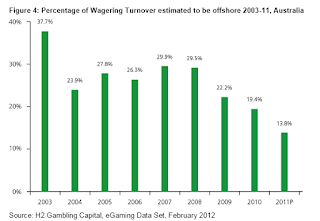 Since 2008, players playing offshore (where they do not contribute to purses) have moved more money onshore; hundreds of millions of dollars. Handle on racing in traditional areas is up 4.8% per year, while internet betting has soared by double digits.

This all occurred while ushering in new competition in the form of sports betting. Handle on sports has grown from virtually nothing 15 years ago, to upwards of $6B today. 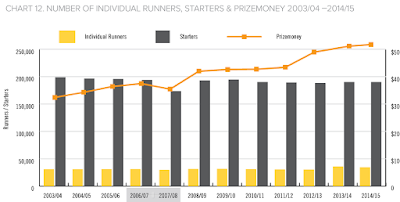 All is not perfect and there have been mistakes made (mostly trying to go back and tax turnover more, which also failed) but they have made some progress in modernizing their betting system, while increasing purses.

This fear paralyzes racing from moving forward. Bettors leave, funds move offshore, new money does not come into the system to replace it. The world is different today and the sport of horse racing realizes it, but it clings to the past because the past is its safety blanket. The past is all it knows.

I mentioned on twitter yesterday that I thought racing could do $50B in yearly handle in a decade if it's done right. I know that sounds silly and many told me just how silly. But it's policies like the above that occur as a matter of course in horse racing and are never corrected. I truly feel North American horse racing is leaving billions and billions of dollars a year of handle on the table.

at February 19, 2016
Email ThisBlogThis!Share to TwitterShare to FacebookShare to Pinterest

I am not so sure the other facts alleged in your post are correct when one of your first assertions (that there is no longer any racing in Virginia) is incorrect. Colonial Downs is closed, yes, but that's not the end of all racing. In fact, the local horsemen are utilizing "out of the box" thinking to create a new racing model there.

Offshore betting needs to be made illegal in all jurisdictions, period. If bets don't flow back to support the racing product, then the businesses who take them are simply parasites who need to be exterminated.

As for the vague "changes" that horsemen need to support, then more specifics please, and fewer generalities.

I was under the impression that there were no Thoroughbred dates in VA last year. If I am incorrect, I will gladly take that out. I do know racing is suffering there, and certainly ADW taxes/SMF's in 2009 did not help.

"Offshore betting needs to be made illegal in all jurisdictions, period. If bets don't flow back to support the racing product, then the businesses who take them are simply parasites who need to be exterminated."

As my post alluded to, offshore wagering is "illegal" but hoping they are exterminated does not make it so. Drugs are illegal but still flow.

If horse racing in NA continues to offer a poorly priced product, befallen by many of the items I elaborate on, offshore wagering will continue to exist and in some cases thrive. Australia dealt with it through innovation, taking less off of a bet, technological advancements and new wagering mediums.

Thanks for reading, your comment, and have a good weekend.

I am from Australia but have an interest in North American racing via betfair.
Racing in 10 years time could do 500b in turnover or more if a proper business approach was adopted ie 8% takeout etc
Instead racing will all but disappear in a decade

I'm stunned horse racing still achieves $10 billion in turnover in the USA. The people in charge are not friendly to punters and chase away their customers.