Derby Handle Was Up, For More than the Obvious Reasons

The Derby card handle was up to over $200 million this year. It's a big number, in an industry that (outside big days) doesn't see many big numbers.

There's a rush to judgement on big days like this, namely, it's a one-off, the promotion and red carpets and NBC coverage and well, the Derby, is the reason for this big number alone.

Of course the obvious makes a difference, but, for me, it's much more about Occam's Razor than anything else - attracting betting dollars is a very basic proposition. Cards that we see at the Derby, or Oaks, provide betting value. 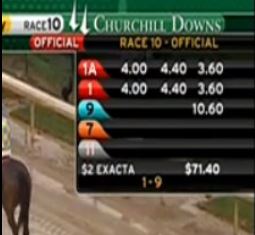 In the Edgewood on Friday, the two logical horses were coupled - the sensational La Coronel and Dream Dancing. These two fillies were 4-5 through most of the betting, but the place pool lagged and lagged the win proposition. On other days, in smaller pools, with less interest, this gap gets filled near post time. It happens almost all the time. But not on this day. The entry ran one-two and paid $4.40 to place.

In a game where favorites are winning at about a 40% clip, and implied probability is near reality, these cards drive more and more interest from serious bettors. In fact, I'd submit that Derby day as a percentage of wagering from serious every day players has increased year over year, precisely for this reason.

Racing can't do this every day, but the principles of value should be striven for every day and they really aren't. In many cases they're an afterthought.

When you offer value, it makes more and more people look at your racecards and you don't need a red carpet for that.

at May 08, 2017
Email ThisBlogThis!Share to TwitterShare to FacebookShare to Pinterest