So, I Bought Big Mac Sauce at the Grocery Store Yesterday 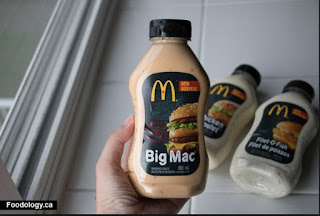 I walked into a friendly neighborhood grocery store yesterday, and much to my surprise I saw a display.

In nice bottles, with McDonald's logos, stood Big Mac sauce, Filet-o-Fish sauce and McChicken sauce. I found out later these sauces went on sale in Canada-only earlier this spring.

This was, on the surface, kind of a curious decision. McDonald's selling their sauces (through a licensing deal with Kraft) is an affront to their core product (restaurant sales), right? If people can buy the taste of McDonald's on the grocery isle it would seem so.

It's also a potential detriment to franchisees, who they have to keep happy.  A McDonald's franchisee pays big money to own a McD's and works on a high volume low margin business model. For example, a front-line employee who makes $20,000/year has to bring in $200,000 of revenue, or the franchise resale cost will go down. It's why they fight margins, and squeeze suppliers so hard.

Offering a product "off book" is probably no bueno to business owners.

So why would they do such a thing, and why would restaurants accept it?

According to BNN, these sauces act as a gateway product to introduce the flavors to people who have not tried McDonald's. In particular, four of five millienials in Canada do not eat at the food giant, and being front and center on grocery shelves - McDonald's believes - can help. In addition, it's pretty obvious that the flavors keep McDonald's on your tastebud radar, and you can't make the real thing at home, so it helps restaurant sales that way.

What strikes me, reading about the above, is that racing has done exactly the opposite.

When Betfair came to partner with racing a dozen or more years ago with a licensing deal - just as Kraft did to McDonald's - they were told to take a hike; that the core product would suffer, so there's no growth.

When Derby Wars came to partner with racing, the same thing. Take a long walk off a short dock. Quit "stealing". Even worse, they pulled out the legal muscles.

McDonald's (and other businesses who sell condiments like this) see potential. Potential for core revenue, yes, but potential to keep their product in the minds of consumers. Racing, on the other hand, sees them as threats. They always have. It's ingrained in its culture.

One business is probably right and one is probably wrong. My money is on the golden arches.

(PS - The sauces are quite good)
at May 31, 2017
Email ThisBlogThis!Share to TwitterShare to FacebookShare to Pinterest