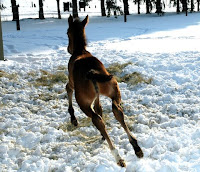 A few notes on this Tuesday.

I watched the New Orleans Handicap on Saturday. The aspiring horseplayer blog placed a link to the youtube video (careful the audio is poor, so turn down your speakers!). It was a thrilling stretch duel between Circular Quay and Grasshopper. Some people say that racing is not exciting, maybe not as exciting as watching yourself get three bells or cherries on a slot machine. Watch that stretch drive. Frankly, those people are nuts.

Rumours are flying that World Champion, and our favourite in our Top Ten to the North America Cup, Somebeachsomewhere has been sold. Well, a portion of him has been sold. There are numbers being thrown about that are staggering. But then again, he is a staggering colt. We'll keep our eye out for news and pass it along.

I read the Trot piece on Keith Waples. For those who might be casual fans, Keith is a harness trainer and driver from yesteryear. And a class act. One thing he said struck me. He said today what he sees is that catch-drivers do not have loyalty to a horse. As soon as the horse gets beat, they jump off for another sharp one. This is true. I don't blame them one bit of course, but it is to me a sign that times have changed. It is one interesting tid bit in the story. Give it a read if you are interested.

I got two emails tonight on the Blackberry. One was early from a buddy who has a nice trotting filly foaled last week. The picture is above. The email was entitled "This is a View We Hope Other Fillies See", which I thought was cool. It is a cool picture too. Then I got another one about 10PM from the same person. A Cam's Card Shark colt we part-own won in 1:52.4, setting a new lifetime mark. It was an email we all like: One of congratulation. I hope to one day send a similar email when the filly above wins her first race. It is one tough game, and all winners on the racetrack were once that picture. I hope he gets a win like we had tonight, because it makes it all worthwhile.
at March 11, 2008
Email ThisBlogThis!Share to TwitterShare to FacebookShare to Pinterest