Rachel's Retirement Makes for a Happy Day, Not a Sad One 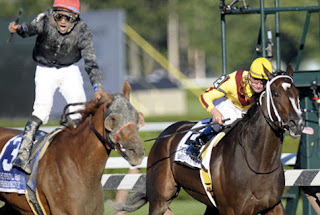 There is nothing better for an equine enthusiast (sorry PETA) than watching a happy horse race. They are full of themselves, they are in their element, they have a certain something that says they are completely happy. Rachel Alexandra, for much of her career was the quintessential happy horse. She would completely slay her opponents like they were 4 claimers from Penn National who had not won a race in 5 years. She would constantly win with ease, and she knew it. She was a pretty hearty alpha-mare, who was happiest beating up on her sisters (and sometime brothers).

In her first time at the gate this year, this all changed. She no longer had that certain something. Watching her at Fair Grounds early in the year you could see it - at the head of the lane when Shirreff's third stringer came at her, there was no separation. The heart was willing but the body was not. The usual excuses ensued with trip, pace, ride, fitness, and all the rest - Rachel can't speak, so we must try and figure it out on our own - but as usual with excuses, it turned out there was more to it.

What we were watching was a mare who was not that same happy alpha horse. She was telling us she was different. They tried and tried to get her back, but enough was enough, and they let her retire to the fields of Kentucky.

It made me think of a horse that we in our stable affectionately called the "Queen". If you will allow me to share a story......

My partners and I about five years ago noticed a harness horse racing at Windsor Raceway. She was a 4YO mare who was finally in a claimer. Watching her race over the previous season we were always amazed at her crushing will to win, and how she seemed to thrive in a dogfight. Upon a recommendation from the trainer that the horse looked alright to him, I popped to the bank for the $18,000 needed, and away we went. We had a new racemare.

And boy did she race. She did not make a million, nor did she enter stakes races, but she tried her guts out every time, never giving an inch on the racetrack. Win or lose, we would beam like a proud parent every time she would race - "our horse tried her guts out!" When she did win, she knew it. It was amazing to be a part of.

In the paddock with the other horses it was not dissimilar, she was the boss. As one of the stable pals relayed to me one day when he went for a visit: If it was carrot time, she got carrots first, and if she did not, she would boot the other horses (mares or geldings) to the other side of the paddock. Those horses knew that you did not mess with the Queen.

The trainer replied "give me another few shots with her. I think she can come back."

So we did. We let him drop her into a cheaper claimer, where she should, if she was her, win by a ton. Because of her lines, we were sure no one would take her, which was a concern.

She was parked the whole mile and she as always, tried. But she could not go anymore and came 5th. The look on her face was painful for us to watch. I saw that look again with Rachel Alexandra, in the picture posted above.

We could have dropped her further and won a purse, no doubt, but that was it - our mare was retired on the spot.

We did not really have the cash to breed her, but we thought about it and did some research. Regardless, she would not race again no matter what. She deserved her retirement.

We found someone who liked her too, and we sold her to him, on the condition she would never race again. he bred her and she is now a mother times two. Her eldest is a two year old now and he has not started yet. I am betting one thing - regardless of his talent level, if he has his mom's genes, he is going to try awful hard.

The retirement of our mare, I am convinced was the right thing to do, because it had to have made her happy. For a tough mare who is used to asking her muscles to work, and they do not, it must be extremely frustrating and unkind. Her retirement was a happy day, not a sad one for us. I feel the same way five years later.

As for Rachel, I am too convinced that she is happy that does not have to go through this any longer. I think it is unkind to think of giving her even one more start.

She can romp in a field and boss the other horses around now.

In effect, she can be a horse. A happy horse who can still be the top dog, just like she was on the racetrack, but with no pain or anguish; with just happiness.

For that I am thankful.

at September 28, 2010
Email ThisBlogThis!Share to TwitterShare to FacebookShare to Pinterest