It is something I have not really seen in my time following racing (since I was a kid in the late 1970's) - a racehorse that is more than a racehorse. Zenyatta has become a phenomenon.

If you search her name via google or Bing there are post after post, and web story after web story. Stories from countless sources, inside and outside equine and sports topics.

If she is in the box to race, you see people at the track that you have never seen before, and might not ever see again. A lot of them hold homemade signs.

If you are watching a football game on a Saturday afternoon on a sports channel, chances are it will be cut into so they can show her race.

Women, underrepresented in terms of the horseplaying community, are enthralled with her story and she crosses demo's like no horse before.

Kids, which we see so few of nowadays at the track, are in full-force, sometimes with their face painted in pink and teal.

Cold, die-hard bettors, pause and watch her race. They don't even have a slight interest in betting the race.

Her facebook page is filled with fans. More than any horse alive - and it is not even close.

She, along with major celebs, was chosen to promote a baseball team. Who has seen a horse on a billboard in modern society? 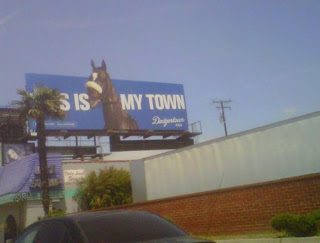 And it is growing.

I watched the views on this video below - a video of her working out.

That is 120,000 views, of a horse doing something hundreds of thousands do around the world each morning. There are companies who pay big dough to firms to get their videos seen 120,000 times, and 99 times out of a 100, fall hopelessly short of that.

Just three days ago, a video of her in the Keeneland Sales ring as a yearling was posted. Already it has 4000 views.

Not long ago, a video of her was posted to her Facebook page, showing her in the stall, prepping for a photo shoot for W magazine. In the video, it shows what we see with many horses - an innocence, an almost child-like persona.

But it's not an every day horse; it's her.

There are countless other examples.

She's much more than a horse, or a racehorse. She's a phenomenon, and I find it fascinating to watch.
at September 14, 2010
Email ThisBlogThis!Share to TwitterShare to FacebookShare to Pinterest

Thankfully she was not a male. She would have been gone two years ago.

She's a star; no question about it. The public (non-racing fan) loves winners..... and win she does.

When she beat the boys in the Cup, it just vaulted her into the stratosphere. This years Cup will be the most watched Classic ever, by a mile.

The non-racing fan/casual fan has a massive love affair with this big horse.

BC is gonna be a zoo. This horse will bring out tons and tons of newbies. She'll be overbet..... but since she looks overbet half the time she races, she'll probably be really underbet.

I'm a lifetime race goer and never in my life have I seen casual fans and hardbitten regulars react to a horse the way they do to her. There's nothing like watching a grizzled old-timer put away his racing form and sweet talk a racehorse like a beloved pet. Or all of the people with signs. She's never referred to be her saddlecloth number, as is usually the case, but by name, and any number of affectionate nicknames. Amazingly, a common sentiment is that it's OK if she loses, should it happen. People love her for who she is. And I think that's probably unique in the sport. Kudos to her excellent human connections for taking their time with her, for treating her with care and respect, and for giving her to the fans in the way they have. It has been an amazing ride.