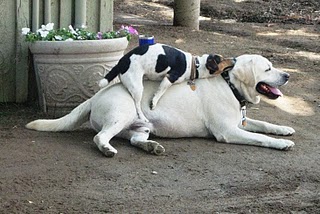 Two pups enjoying their time at Saratoga racetrack outside George Weaver's barn. Not sure who took this, but Dan G on the HTR software board posted it. I'm a sucker for dogs. 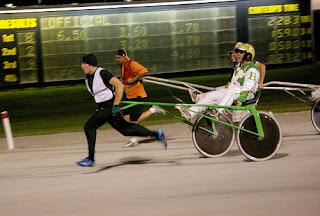 Trainer Nick Boyd participating in the Human sulky pull at Xtreme horsepower at Georgian Downs over the weekend. Nick won the race and credited his performance to his feed program (thanks Mrs. Boyd!) 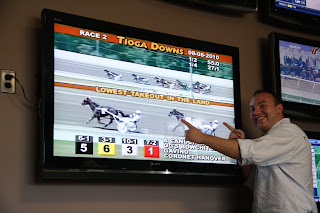 Horseplayers Assn of North America board member Charlie D has moved some of his play from thoroughbred to harness because of Tioga Downs' takeout decrease. He constantly posts "have you guys seen their feed - lowest takeout in the land - cool" Way to go Charlie. 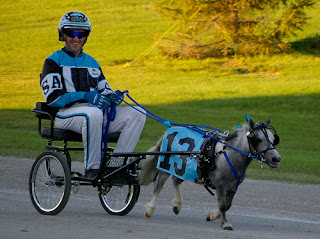 This little fella was at Georgian Xtreme this weekend in the mini-horse race (Norm F photo)
at September 01, 2010
Email ThisBlogThis!Share to TwitterShare to FacebookShare to Pinterest