I'm So Glad Zenyatta Did Not Go to the Personal Ensign 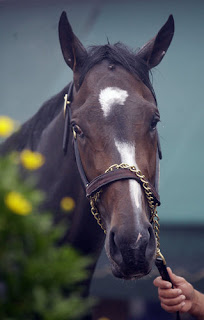 Rachel Alexandra was beaten today in the Personal Ensign stakes at Belmont by a closer aptly named Persistently. Rachel battled her main foe through 47, 12 and 37 fractions before coming home in a very slow 27.1 to be defeated by the closer. As many of you have noted on the blog here about the mare in her previous '10 efforts, she is just not last year's horse.

It appears that Steve Assmussen agrees and appeared almost melancholy:

“I’m very disappointed that she lost, but I am always very happy with Rachel. It hurts to lose and you’re disappointed for it, but if that’s the case, just think about how happy she’s made you and all the things she has done for us. She’s a tremendous mare. If she isn’t exactly where she was last year, hopefully she can get back there.”

I bet hundreds of races a week, both thoroughbred and harness, and I find I truly watch so very few races. If I have four tracks going I have perfected listening to the call for my horse's name, while I scan for opportunities in the other race cards. For a horse like Rachel's 2009 sked, that was not the case. Horses like her make me pause, turn off my betting systems and windows, grab a coke, and be a fan. However, this year it is all-too-obvious that she is not quite the same horse.

Superstars like her rarely come along in our sport and we are very lucky to have watched her. We see that each year in the three year old divisions. People will get excited about a horse, but the horse is nothing to really get excited about. The horse simply wins races against other horses his or her age; someone has to win the Derby or Belmont. But not Rachel - she was generational - she was a filly you knew was special. She gave us goosebumps and she was an absolute superstar. She did not just win, she crushed.

Special horses - horses with innate greatness - are very rare. In my opinion, greatness in equine sport is when other horses know when they are beaten at about the quarter pole. Last year in the Woodward, we all remember when Rachel went a hot pace and won the race holding off the closers. During that race she absolutely destroyed the spirit of a couple of her speed foes, one of whom was knocked out of the race with an injury. Zenyatta did similar with St. Trinians in the Vanity. Great horses do more than just win, they dominate and break another horse's will. Rachel was that kind of horse.

Which brings me to my thought. If Zenyatta had have made the trip to the Personal Ensign like so many wanted, she would have won easily. Yes, I realize that the dynamics might have been different, but a trotting horse last quarter off a three quarters of 12 and change showed that this field was not much at all, and little match for the big mare.

But, I thank god she didn't.

If Zenyatta had come and won, we probably would have heard just how much better she was than Rachel. We would have heard that "maybe Rachel's 2009 was not as good as we thought". We might have have heard some say "she clearly is not one of the greats of this game if you look at her whole career". All because a 2010 Rachel at maybe 80% lost one race to Zenyatta.

To some fans, in 2 minutes and four seconds virtually everything Rachel had done up to that point would have been forgotten.

What a disservice that would have been to this wonderful, wonderful filly.

Rachel is a superstar, and no matter what happens from here on out, that is the way I will remember her. I'm just glad Zenyatta did not show up to spoil the party.
at August 29, 2010
Email ThisBlogThis!Share to TwitterShare to FacebookShare to Pinterest

Rachel is good horse not great. She has heart and a will to win but sometimes that is not enough. Hope they retire her.

And no! Her times and beyers this year before the Ensign were about the same as last year. The competition just caught up to her.

Rachel Alexandra happened to be a dominant horse in a year when the 3yo crop was arguably the weakest ever in American throughbred history. Nice filly that was equally as LUCKY as she was GOOD.

It's pretty asinine to say the competition caught up to her. Figures are just that; figures. She beat a Kentucky Derby winner, Belmont Stakes winner, and many other Gr.1 winners last year.

I think you mentioned the east coast guys a few posts ago when discussing Zenyatta. I wonder how they are going to spin this one. Some in the press have even had her in the HOY debate this year.

Being rational is not something that we see very much when it comes to this filly, or the breeders cup classic champ, and I don't expect it now.

Like you said earlier this year, I wonder how long Jess will go before pulling the plug on the year. You are already seeing the comments on Rachel - I cant see them waiting too long before they realize they have cheapened her.

Nice post! I kind of wish they'd retired her last year. The memory of what she accomplished was so strong and I hate the thought of it being tarnished. To me, though, it isn't tarnished. It'll always exist. But it also feels like they wrung her out in the Woodward just so they could win an award, and then they bring her back as a 4YO... for what? How on Earth could she top her 2009? She captured racing the way Zenyatta's Classic did. And as we've seen from the press and the talking heads, everybody wants both Rachel and Zenyatta to repeat their magic moments over and over again. That's just not realistic, so people complain and diminish. I don't think Jess Jackson and Steve Asmussen have a clue about Rachel. Not at this point. But I don't want to see her struggle anymore.