Stepping Up to the Plate - in a "Big" Way 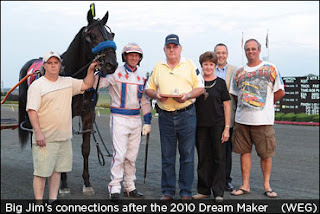 As we have spoken about recently, there is a movement in Canada to fund an initiative with purse/slot dollars to grow our sport. Horse owners are being asked if they support using a 5% purse cut to fund a slush fund to increase wagering and interest on horse racing. So far the plan is liked by some, and not by others. The old "the tracks should do it, not us" line has popped up again and again.

One owner said that it's time to put his 'money where my mouth is'.

Jim Carr owns the outstanding two year old Big Jim, who won the Dream Maker at Mohawk in a sizzling 51 and 1. He is donating a percentage of his winnings to this plan, which Standardbred Canada is holding in trust, if it comes to fruition.

"Carr, who also owns Riverwalk and Brush With Royalty, plans to contribute a percentage of earnings from each horse he owns to the Plan, starting immediately. He is sure that action must take place to allow the sport to thrive and realizes the majority of his horses’ earning power comes in the next several weeks.

“We need to do something,” he said, stressing that stakeholders need to step up to invest and that the funding must be spent in a prudent and professional manner in order to grow the sport.

Big Jim is not only racing for Mr. Carr, he has stepped up to the plate to race for the future of an industry. Those are some heavy horseshoes indeed.
at August 18, 2010
Email ThisBlogThis!Share to TwitterShare to FacebookShare to Pinterest