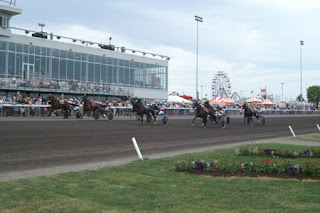 Well it is two days to one of the most unique and interesting races in the world - the Gold Cup and Saucer on tiny Prince Edward Island, where people have been racing horses since 1888.

For fans who do not know, this is the 51st edition of the race, and the folks come from all over to see it. At two minutes to midnight on Saturday, some funny things will happen. Horsemen will hang from the backstretch fences to watch. The Ferris wheel will have no one on it. The concession stands will not have a soul in line. The kitchen will grind to a halt. It's post time at Charlottetown.

People do not come to this race to be seen, because it is a cool thing to do, because their friends are going, or because a concert with a big name takes place afterwards. They come to watch a harness race with horses going in speeds that the little track, and these fans, never get a chance to see. The purse, $60,000, is about $59,500 higher than the average purse in the region.

This year a pretty decent field has been assembled, and the huge throng of racing fans should see a very fast race. Unfortunately on paper, the race seems pretty square - the chalk, Stonebridge Terror, has intimidating speed from an intimidating post. I honestly do not know who will challenge him early, if anyone, but this is the Gold Cup and Saucer and not a race at Mohawk. I think someone will. The other two elimination winners also have good posts. I suspect that they will have a good shot at a track record. I will support the track and bet a few dollars on Saturday, but I just do not know who to take a swing at!


Here is a replay of last year's race, and below is Monday's elim with the chalk winning. It's amazing to see so many fans out on a rainy Monday in a small city no less. I was there last year on Monday's elim night, and I can attest, there were so many people enjoying the races.

Tomorrow's Pick 6 at the Meadowlands features a $110k carryover, and several stakes. It does not look like a really hard sequence at first glance, however after digging deeper it's a hefty ticket.

I'll pop back tomorrow more than likely and share some thoughts. I hope you do as well.
at August 19, 2010
Email ThisBlogThis!Share to TwitterShare to FacebookShare to Pinterest