Lessons from the Three Down Sport 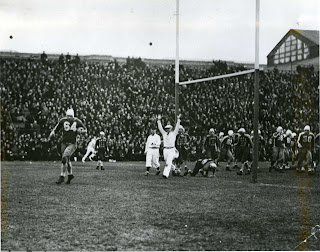 I am sitting here watching not the Eagles game, but the Pre-Game for the 98th Grey Cup. Trust me, this is something that rarely happens. I can count on one hand how many Grey Cup's (the Championship game for Canadian football for those who do not know) I have watched since the 1980's. This is new for me; or perhaps more appropriate, new again.

Back in the 1970's I loved this three-down football as a kid. I played it and I watched it weekly on one of my two channels. I even had a jersey made for myself (there was no jersey sales for the league back then) at a local shirt store. Come the late 1970's and early 1980's, though, I found the NFL and came to resent this "second rate league". It was not the thing to do, and I was not the only one.

In University, Grey Cup parties were non-starters; there simply was not one to be found. But Super Bowl parties were prevalent. Even my stable partner, whose father played offensive line for the Toronto Argos in the 1960's, would not watch a game if you paid him. This once proud sport, which filled stadiums and dominated the television ratings was on the skids.

In the mid to late 1990's, the league was as dead as dead could be. Less than 100,000 people across this entire land were watching games. The Grey Cup ratings were dreadful, teams folded and nothing could stop the onslaught. If you were a stock trader, you would have shorted the hell out of this league - if you could find a buyer for your short, which was doubtful.

But a funny thing happened: The league changed.

Miles Long wrote that the catalyst was the league getting smaller to grow and it was a management decision. The 1995 Grey Cup, for example, was given for the first time to a small city - Regina - which also was football mad. This Cup was infectious, according to the writer. In addition, cavernous stadiums, like Olympic Stadium in Montreal were quashed, for smaller stadiums, like McGill University's. The league started to gain momentum.

Although nowhere near out of the woods, the bottom seemed to be hit.

Later on, through some investment, grass-roots organization and vision, the league began to not only hold its own, but grow.

The "this is our league" marketing program and the use of the very good CFL.ca worked. When a team wins the Grey Cup now it is not taken back to a dark building, it is brought around the country as players get to keep it for a week (like the Stanley Cup does), getting local TV and print headlines. There was much more.

With the coveted 18-34 demo, it worked special wonders as 20% of the leagues viewership comes from that segment. Last year over 14 million people watched the Grey Cup, which is about the same number of people who watch the Super Bowl in Canada. Television ratings now beat baseball and NASCAR - by a good margin. Sales of merchandise are up 150%.

This league, which anyone with any business or marketing sense 15 years ago, would have predicted demise is growing.

My obvious point is that racing and the CFL could very well be cousins. Packed grandstands were a thing of the past in racing just like in Canadian football. Bettors lined up to play our game, just like people trying their darndest (with most failing) to get Grey Cup tickets long ago.

For one sport, there is hope, for another it seems there is none. But I don't think it has to be that way. If the CFL can do it, why can't we?

If the CFL can make and run a CFL.ca which gives people access to everything for free, why can't we have a national racing site that does the same?

If the CFL can get into homes via various means, why can't we have an ADW which allows (shudder the thought) everyone to watch and bet regardless of where they live?

If the CFL can offer $15 tickets to get to the price-sensitive sports fan, why can't we have a max takeout of 12% to get at the massive amount of price sensitive bettors?

If the CFL can partner to get its games shown on the competitor NFL network, why can't we have a national partnership done with Betfair?

For those of you who have read this, you know as well as I do that racing is in a lot better shape than the 1990 CFL. If they can turn it around, so can we.

But it won't get done on hope, or wishing. It will get done on organization. Things like the Racing Development and Sustainability Plan here in Canada (so far it has generated grass-roots support but poo-pooed by the old guard) are an obvious catalyst for us, and something that should not be done tomorrow, but done ten years ago. I am sure there are other ways to do this, too. The question to me is: what's taking so long?

The game is starting now, so I have to run. It's time to watch some CFL football.
at November 28, 2010
Email ThisBlogThis!Share to TwitterShare to FacebookShare to Pinterest

This is why racing will not die. It may need to crash like the CFL, all the fair weather people heading for the exits, leaving the true lovers of the sport behind; people who get it. Maybe then, racing will start being the game it needs to be.