Well, not really, but someone told me that a headline like that grabs attention. Anyhow, I did notice a couple of things on twitter which made me think, and wonder, and scratch my head.

First, Uncle Mo is back. The talented bay horse who can type, last informed the world via twitter that he was very excited for the Wood Memorial, which didn't turn out overly well.

Then the cone of silence took over. With all the weird press conferences and Mike Repole quotes that were flyin' at the Derby, I don't blame Mo for not talking or typing at that time. However, twitter broke some big news from him tonight. He told us three hours ago that he is looking forward to Saratoga.

It's nice to see Mo back twinkying. Let's hope the spelling mistake in his last tweet isn't a Freudian slip, or even worse, a quarter crack.

Secondly, Bob Baffert is now on twitter. His name is not Bob B, or Sunglasses Bob, it's Midnight Lute; which I guess is fair enough. But Bob, known for pinache, a little style and some braggadocio (his webpage has the word "legendary" on it, when talking about himself), is still using the goofball Twitter egg as his picture.

What's up with that, seriously. Can we get a picture of anything instead? Go wild and maybe even use one of, oh, Midnight Lute.

The other funny thing I find with Bob's twitter account is that he is following only one person. Is it Alex Waldrop, Jerry JAM, some dude at the TOC, Bode? Nope. He follows swimmer Michael Phelps. 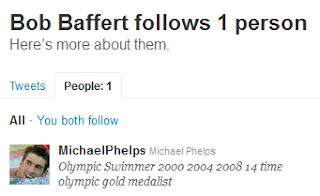 I scanned Michael's twitter feed and I have not found a "hey, look, this dude who has an egg is following me" twinky yet, but I bet it's coming.

Anyway, that's the cutting edge twitter news on a slow Wednesday night. I'll report back via twitter if Bob adds a picture or if Mo says anything we might be able to make a few dollars on. I'm watching them like a hawk.
at July 06, 2011
Email ThisBlogThis!Share to TwitterShare to FacebookShare to Pinterest

"Taking away race day Lasix is like getting rid of the face mask. Going to be a lot of bloody noses."

Thought that was odd.