When I (and probably a lot of you) went to school, I had to budget cash for tuition, residence, food - and textbooks. The latter seemed to be something that confused me most because I could never quite figure out why a book could cost so much. This especially considering I would only use it for a year, and then hopefully sell it for 15% of the list price.

I often wondered if I should have been majoring in textbook writing instead of business. It seemed pretty darn lucrative.

Today, one of the oldest businesses in the land - textbooks - has been disrupted. No longer do you have to shell out $175 for a science text, it costs a fraction of it - and it is much better than the original. It's an interactive textbook.
The old guard is not very enthralled with this disruption (who wouldn't like selling virtually the same book each year for a couple of hund a pop), but the company asked itself a couple of questions, and decided it needed to be done:
Clearly there is a parallel here for racing, and it is not a flattering one. Yes, we in racing tend to accept received wisdom, and we rarely seem to ask what the market needs.

Ten years ago Betfair asked themselves those two questions. The market needed a low takeout, interesting platform to bet on via the net. By developing their technology, they found themselves in a position to provide to that market and fill that need. The rest is history.

Does this mean for racing we can not come up with a disruptive technology of our own? Sure we can, in my opinion. But as an instructive first step, we have to stop 'accepting the received wisdom'. I think we can all agree: That's gotten us nowhere.

Notes: There is quite a dust up on HD.com about Pastor Stephen. He is out with a coffin bone after Saturday's break stride. Most saw the post parade, including several of us on twitter. 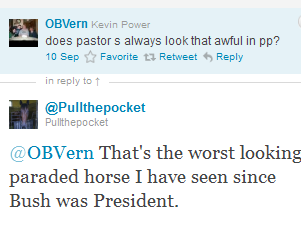 The question being asked on the chat board is: "Where were the vets?" I once spoke with one who said it's the toughest part of his job. Considering the trainer is one of the top names in the sport, no track vet wants to put the hammer down. It's one of those tough calls in our sport, because the participants have a ton of power. There is an answer to this issue, but I am not smart enough to figure it out, that's for sure.

Dan over at throtrends has a great article up on racing demographics. Of note, Dan hosts a weekly racing chat about the sport on Twitter Tuesday at 9PM ET. Just search for #trbchat

This week: The $1M Canadian Trotting Classic. Next Thursday, Little Brown Jug.
at September 13, 2011
Email ThisBlogThis!Share to TwitterShare to FacebookShare to Pinterest

This is going to be weird coming from me, being I follow thoroughbred racing, oh.. about .5% of the time. But this is why I find what the KHRC is doing to John Veitch such a shame. This was the first time television came into the equation so how can you punish someone over the ESPN comments, meanwhile the trainer gets off, the jockey gets a fine, and they go for the scalp of a person who has a great reputation.

That being said, no one will say squat about Pastor Stephen. My question is where was Takter when he watched the horse parade? Why didn't he ask the vet to scratch him?